Centre will soon come out with an updated National Water Policy

Posted On: 28 SEP 2019 6:51PM by PIB Delhi
National Bureau of Water Use Efficiency is being mooted 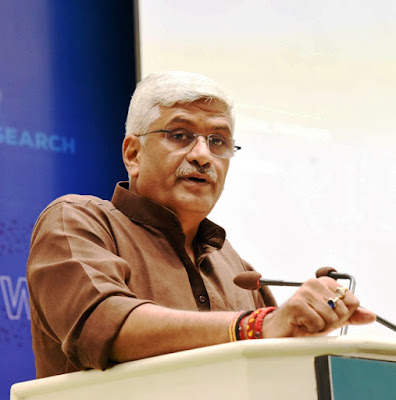 Government of India will soon come out with an updated version of  National Water Policy to effect key changes in Water Governance Structure, Regulatory Framework, besides setting up of a National Bureau of Water Use Efficiency. Speaking at the valedictory session of the 6th India Water Week-2019 here, Union Minister for Jal Shakti Shri Gajendra Singh Sekhawat said that hydrological boundaries rather than administrative or political boundary should become part of the water governance structure in the country. He said, for this consensus building among the states within the Constitutional framework is a necessary pre-condition.

Shri Shekhawat said said that water conservation along with water-harvesting and judicious and multiple use of water are key to tackle the water challenges in India. Calling for rejuvenation and revitalization of the traditional water bodies and resources through the age-old conservation methods, the Minister underlined the need for dissemination of modern water technologies in an extensive fashion. Dwelling on the idea of Water Trade, Shri Shekhawat said that water surplus states like Chhattisgarh can gain by sharing the resource with the deficient ones. He also asked the States to collect data on water resources and to share the same with others with an open mind.

In his address, the Minister of State for Jal Shakti Shri Rattan Lal Kataria said that demand side management of water should get priority over the supply side management and called for massive conservation of the scarce resource. Underlining the need for recycle and reuse of water, he said that Integrated Water Management is a tool for poverty reduction and sustainable economic development.

Speaking on the occasion, Secretary, Department of Water Resources, River Development and Ganga Rejuvenation Shri U.P Singh said that National Water Policy of 2012 needs major updation in the light of new challenges especially the ill-effects of climate change. Batting for policy changes for giving incentive to crops using less water, Shri Singh said that Participatory Ground Water Management should be promoted in a big way to maintain quality and sustainability.

India Water week was inaugurated by the President Shri Ram Nath Kovind on 24th of this month with a theme of “Water cooperation: Coping with 21st Century Challenges”. Japan and European Union were associated as partner countries for this mega event.

Ministry of Jal Shakti has been organizing India Water Week since 2012 as an international event to focus on water related issues. Five editions of India Water Week have been organized so far.  Water Resources Ministers of various States have attended the Inaugural Function. About 1500 delegates from India and abroad participated in this event, which included about 63 delegates from 28 countries.

The event was divided into Seminars (15 nos.), Brainstorming Sessions (4 nos,), Panel Discussions (12 nos.) and Special Session (6 nos.). Apart from this, an Exhibition showcasing the technologies and solutions in water resources sector was also organized at Indira Gandhi National Centre for Arts (IGNCA).  About 62 organizations displayed their work in the exhibition. Many reputed National and International Organizations, Research Institutes, Educational Institutions and NGOs from water resources, agriculture, power sectors participated in the event to share their knowledge and experience in the sector.
--------------------------------
SNC
(Release ID: 1586567) Visitor Counter : 50
Posted by Media Link Ravinder at 19:45 1 comment: Links to this post

I take the floor to exercise India’s right of reply to the statement made by the Prime Minister of Pakistan.
Every word spoken from the podium of this august Assembly, it is believed, carries the weight of history. Unfortunately, what we heard today from Prime Minister Imran Khan of Pakistan was a callous portrayal of the world in binary terms. Us vs Them; Rich vs Poor; North vs South; Developed Vs Developing; Muslims vs Others. A script that fosters divisiveness at the United Nations. ​Attempts to sharpen differences and stir up hatred, are simply put-“hate speech”.


Rarely has the General Assembly witnessed such misuse, rather abuse, of an opportunity to reflect. Words matter in diplomacy. Invocation of phrases such as “pogrom”, “bloodbath”, “racial superiority”, “pick up the gun” and “fight to the end” reflect a medieval mindset and not a 21st ​ century vision.

Even coming from the leader of a country that has monopolized the entire value chain of the industry of terrorism, Prime Minister Khan’s justification of terrorism was brazen and incendiary.


For someone who was once a cricketer and believed in the gentleman’s game, today’s speech bordered on crudeness of the variety that is reminiscent of the guns of Darra Adam Khel.
Now that Prime Minister Imran Khan has invited UN Observers to Pakistan to verify that there are no militant organisations in Pakistan, the world will hold him to that promise.


Here are a few questions that Pakistan can respond to as a precursor to the proposed verification.
Can Pakistan confirm the fact that it is home to 130 UN designated terrorists and 25 terrorist entities listed by the UN, as of today?


Will Pakistan acknowledge that it is the only Government in the world that provides pension to an individual listed by the UN in the Al Qaeda and Da’esh Sanctions list!


Can Pakistan explain why here in New York, its premier bank, the Habib Bank had to shut shop after it was fined millions of dollars over terror financing?


Will Pakistan deny that the Financial Action Task Force has put the country on notice for its violations of more than 20 of the 27 key parameters?


And would Prime Minister Khan deny to the city of New York that he was an open defender of Osama bin Laden?
Mr. President,


Having mainstreamed terrorism and hate speech, Pakistan is trying to play its wild card as the newfound champion of human rights.


This a country that has shrunk the size of its minority community from 23% in 1947 to 3% today and has subjected Christians, Sikhs, Ahmadiyas, Hindus, Shias, Pashtuns, Sindhis and Balochis to draconian blasphemy laws, systemic persecution, blatant abuse and forced conversions.


Their newfound fascination for preaching human rights is akin to trophy hunting of the endangered mountain goat - markhor.


Pogroms, Prime Minister Imran Khan Niazi, are not a phenomenon of today’s vibrant democracies. We would request you to refresh your rather sketchy understanding of history. Do not forget the gruesome genocide perpetrated by Pakistan against its own people in 1971 and the role played by Lt. Gen A A K Niazi. A sordid fact that the Hon’ble Prime Minister of Bangladesh reminded this Assembly about earlier this afternoon.
Mr. President,


Pakistan’s virulent reaction to the removal of an outdated and temporary provision that was hindering development and integration of the Indian state of Jammu and Kashmir stems from the fact that those who thrive on conflict never welcome the ray of peace.


While Pakistan has ventured to upstream terrorism and downstream hate speech there, India is going ahead with mainstreaming development in Jammu and Kashmir.


The mainstreaming of Jammu & Kashmir, as well as Ladakh, in India’s thriving and vibrant democracy with a millennia-old heritage of diversity, pluralism and tolerance is well and truly underway. Irreversibly so.


Citizens of India do not need anyone else to speak on their behalf, least of all those who have built an industry of terrorism from the ideology of hate.