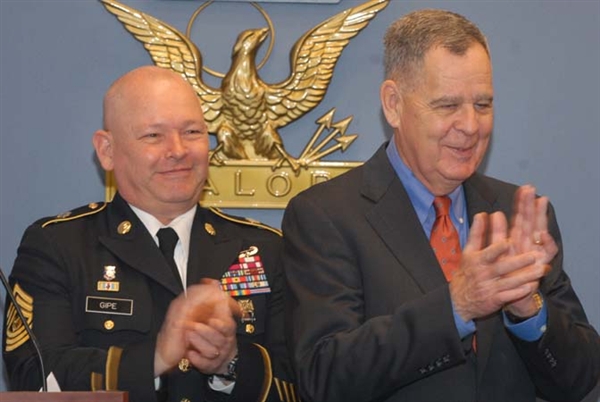 Dennis M. McCarthy, assistant secretary of defense for reserve affairs, and Army Command Sgt. Maj. John D. Gipe, senior enlisted advisor for the office of the assistant secretary of defense for reserve affairs, applaud award recipients during the 2010 Department of Defense Reserve Family Readiness Awards ceremony in the Pentagon, Feb. 18, 2011. DOD photo by Elaine Wilson
Posted by Rector Kathuria at 18:18 No comments: Links to this post

Posted by Rector Kathuria at 17:21 No comments: Links to this post

CMC to do successful BMT for thalassaemia

Thalassemia (also spelled Thalassaemia) is an inherited autosomal recessive blood disease. In thalassemia the genetic defect, which could be either mutation or deletion, results in reduced rate of synthesis or no synthesis of one of the globin chains that make up hemoglobin. This can cause the formation of abnormal hemoglobin molecules, thus causing anemia, the characteristic presenting symptom of the Thalassemias. 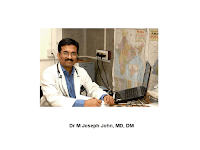 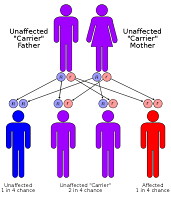 The two major forms of the disease, alpha- and beta- are prevalent in discrete geographical clusters around the world - probably associated with malarial endemicity in ancient times. Alpha is prevalent in peoples of Western African descent, and is nowadays found in populations living in Africa and in the Americas. Beta is particularly prevalent among Mediterranean peoples, and this geographical association was responsible for its naming: Thalassa (θάλασσα) is Greek for the sea, Haema (αἷμα) is Greek for blood. In Europe, the highest concentrations of the disease are found in Greece, coastal regions in Turkey, in particular, Aegean Region such as Izmir, Balikesir, Aydin,Mugla and Mediterranean Region such as Antalya, Adana, Mersin, in parts of Italy, in particular, Southern Italy and the lower Po valley. The major Mediterranean islands (except the Balearics) such as Sicily, Sardinia, Malta, Corsica, Cyprus and Crete are heavily affected in particular. Other Mediterranean people, as well as those in the vicinity of the Mediterranean, also have high rates of thalassemia, including people from the West Asia and North Africa. Far from the Mediterranean, South Asians are also affected, with the world's highest concentration of carriers (16% of the population) being in the Maldives.

The thalassemia trait may confer a degree of protection against malaria, which is or was prevalent in the regions where the trait is common, thus conferring a selective survival advantage on carriers (known as heterozygous advantage), and perpetuating the mutation. In that respect the various thalassemias resemble another genetic disorder affecting hemoglobin, sickle-cell disease.you may see more detail with a click here.
This Article is to create awareness in the public regarding thalassaemia and stem sells transplant Dr.Joseph John said that there is need for proper education of masses to create awareness regarding thalassaemia.
Beta-thalassemia (β-thalassemia) is a form of thalassemia due to mutations in the HBB gene on chromosome 11 [1], inherited in an autosomal recessive fashion.
The severity of the disease depends on the nature of the mutation.
In either case there is a relative excess of α chains, but these do not form tetramers: rather, they bind to the red blood cell membranes, producing membrane damage, and at high concentrations they form toxic aggregates.Wikipedia also informs in detail about Thalassemia major and Thalassemia minor. Click on the link Please.
Talking about this problem  Dr M Joseph John. MD. DM  of CMC Hospital  says that the thalassaemia prevalence in India is 2-14% in different regions of the country.  In Punjab the prevalence reported is 5 - 6.5%.  Although measures are being taken to curtail the incidence of thalassaemia major babies born in the state, the existing patients find it difficult to sustain themselves with regular blood transfusions and iron chelation as the average cost of transfusion-chelation in the country is about 2-4 lakhs/year depending on the age and weight. The average life span of a thalassaemia major patient in India is approximately 20-25 years before he succumbs to health problems related to iron overload or infections related to blood transfusions.

The only curative treatment for thalassaemia is allogeneic stem cell transplantation if there is a HLA identical sibling or family member.  If done between the ages 2-7 years, the success rate for this procedure is 80 -90%.  The cost of the transplant which is approximately Rs 8-10 lakhs per patient is equivalent to looking after a thalassaemia major patient for 5-8 years with supportive care.
CMC Ludhiana is first institution in Northern India to do successful allogeneic stem cell transplant for thalassaemia patients and the only institution to offer transplants for paediatric patients. So far CMC done a total of 17 transplants between the ages 1 ½ to 60 years.  Of them 5 were for patients with thalassaemia patients aged, 8, 13, 14 and 18 years.
Common questions and answers about thalassaemia transplant.
Ques 1:  Who can be a donor of stem cells for thalassaemia transplant?
Ans:   Patient’s brother or sister has a 25% chance of being an HLA identical stem cell donor. There is approximately 5% chance that a parent can be a match.
Ques 2:  What are the possible problems in the donor?
Ans :  Stem cell donation is a safe procedure and the donor need to be hospitalized for only 1 day. Stem cells are either taken through the peripheral vein in the hand or directly from the bone marrow.
Ques 3:  What is the hospital stay required for transplant?
Ans:   Patient needs to be hospitalized in specially constructed HEPA filtered room for approximately 1 to 1 ½ months.
Some other organisations are working for this noble cause.
Thalassemics India,an NGO founded in 1986, is striving to ensure that every thalassemic child gets proper medical treatment.It is an organisation that helps thalassemics to LIVE not just EXIST.
Foundation Against Thalassaemia is a registered NGO based at Faridabad Haryana India. Foundation was set up in 1995 and was registered under societies act 1860/21 on 24 April 2001 by a group of parents & charitable members of community. Foundation received no subvention [grant] from Government over the years, Foundation had been inspired to work towards improving clinical care, enhance public awareness of Thalassaemia. This is to ensure that children born with Thalassaemia major can grow in the healthy and happy environment. Its members are engaged in various activities aimed for 'Prevention and Treatment' of a dreaded disease Thalassaemia.
The U.K. Thalassaemia Society has been in existence for 30 years and has amassed a wealth of experience in Thalassaemia not only in the U.K. but through its network and associations with other countries.
For More detail in Ludhiana and other parts of northern parts of India, needy persons may  contact Dr M Joseph John, MD, DM
Associate Professor
Clinical Haematology, Haemato-Oncology
& Bone Marrow Transplant Unit
Christian Medical College
Ludhiana-141 008
(M): 08054959525
(O): Direct: 0161-5037957 or 0161-2600270 Ext 4823/5022
Fax:0161-2600270
Details compiled and presented by Rector Kathuria & Shalu Arora
Posted by Rector Kathuria at 16:19 No comments: Links to this post