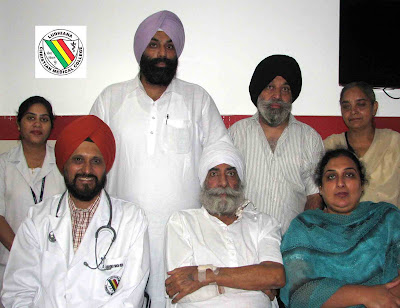 Suwinder Singh; a 72 year old from Patiala was in severe pain in his right hand. He had an earlier fistula for dialysis as his kidneys had failed. He was seen at various hospitals in Chandigarh, Mohali , Delhi and Gurgaon . However his hand continued to become blue and he could not sleep because of the pain. He then came to Dr Harinder Singh Bedi - Head of Cardio Vascular Endovascular & Thoracic Surgery at the Christian Medical College & Hospital in Ludhiana. Dr Bedi realized that the hand was rapidly turning gangrenous and would have to be cut if nothing was done. The reason for the low flow of blood to the hand was the fact that the shunt for dialysis was stealing blood from the hand. The option of narrowing the shunt had already been tried but had failed and the pain was terrible. If the shunt was dismantled it left the problem of how to get the dialysis done.
Dr Bedi has had extensive experience during his work in Australia and he is credited with having a Limca World Record in vascular surgery to his name. He has also extensive experience with endovascular surgery (in fact the first hybrid redo endovascular operation was done by him in Punjab and was awarded the first prize at an International Conference). A high risk surgery was planned. The shunt was taken down and without any additional cut an endovascular procedure was done and a stent put in the narrowed artery. The hand colour improved dramatically and the pain disappeared. Now the issue was how to put in a new shunt so that the life saving dialysis could continue. There were no sites available on the hands which are the usual sites for a shunt. So a innovative method of putting a graft in the leg was used. A special imported tube was grafted between the artery and vein of the leg. It started functioning immediately – a hand shunt takes about 3-4 weeks to ‘mature’.
The patient and his family are very happy that they came to CMC. Mr Suwinder Singh is now totally pain free. The other members of the team are Dr A Joseph, Dr Arun Gupta, Dr Neharika and Dr Arjin.
Dr Abraham G Thomas – Director of CMC & H – said that Dr Bedi and his team had a good experience with the creation of dialysis shunts and this helped them to devise this innovative method.
Posted by Rector Kathuria at 10:16 No comments: Links to this post