Skeena is story of discovery, death and determination 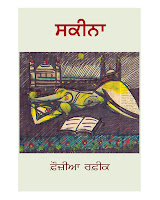 According to media Fauzia is a South Asian Canadian writer of fiction and poetry. Her English and Punjabi writings have been published in Canada, Pakistan, and on the Web. Print titles include novel ‘Skeena’ (Punjabi, Lahore 2007) and anthology ‘Aurat Durbar’ (English, Toronto 1995).She maintains sites and blogs on Punjabi literature and art, ‘honour-killings’, blasphemy laws, and the environment. A selection of her English and Punjabi poetry ‘Passion-Fruit/Tahnget-Phal’ is due to come out in 2011.Fauzia will read from the Punjabi edition of her novel ‘Skeena’. Randeep Purewall says

Skeena is the story of one woman inhabiting four worlds.If, to borrow the words of Kishwar Naheed ‘Skeena is a novel on patriarchy that never uses this word’, it is also the story of an honour killing where not one drop of blood is shed. Instead, it takes the reader and one woman of a village, from the gradual Islamization of law and society in Pakistan to the social politics of post-911 Canada.It treats the familiar themes and experiences of a South Asian woman in Pakistan and Canada without conforming to or selling stereotypes to the public.It moves flowingly almost screenplay like reproducing vivid scenes, such as the punishment of a villager in Skeena’s village, in the reader’s imagination.

Telling a story of discovery, death and determination, Skeena is inspiring without being overblown, political without being ideological, and heart-rending without being tragic.Skeena is a novel by Fauzia Rafique to be launch on  Saturday, April 9 · 2:00pm - 4:00pm at Surrey Public Library, Newton Branch.   Fauzia started this novel in 1991 and continued the writing till it's completion in 2004. Fauzia devoted the golden period of her life to write this novel. After completing the pen work she started  the next face of struggle for its publication. it was her good luck due to her continued devotion  Amjad Saleem of Sanjh publication took the pains and novel published in 2007 by Sanjh publications Lahore in Punjabi with Shahmukhi script. Novel was published in a beautiful form,  released in 9 cities and hit the stalls.
Novel Skeena touched the sky at all book counters. Fauzia was happy but not satisfied. its publication is Gurmukhi script was still a challenge. she was not in the mood to compromise for its publication without royalty.  ultimately novel published in Gurmukhi script also by the same publisher Sanjh of Lahore. Now you may read it in English (Roman words) also. If possible must partricipate the event. You wil meet and listen the Guest Speakers like Ajmer Rode, Bhupinder Dhaliwal, Sadhu Binning, Surjeet Kalsey, Dr. Saif Khalid and Shahzad Nazir Khan.
Poetry Manolis Readings will also take place by Yannis Ritsos and 'Vernal Equinox') Event Host at Facebook is Sana'a Janjua.

*Skeena: A story of discovery, death and determination

Posted by Rector Kathuria at 13:54 No comments: Links to this post

Email ThisBlogThis!Share to TwitterShare to FacebookShare to Pinterest
Labels: Books

Posted by Rector Kathuria at 08:32 No comments: Links to this post