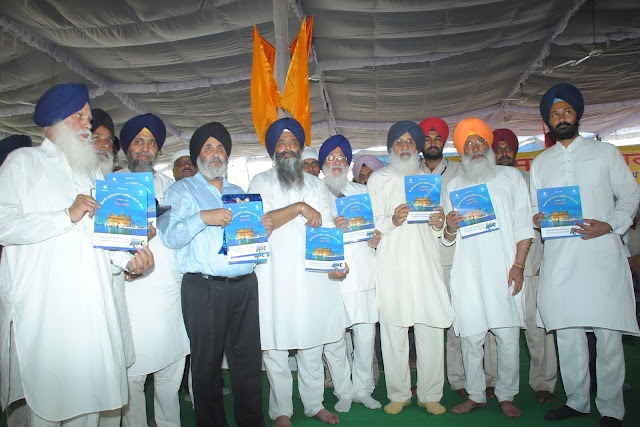 Chandigarh, August 20:-- The Shiromani Akali Dal Patron and Chief Minister, Punjab S. Parkash Singh Badal appealed to the sikh masses that to maintain Supremacy of Sri Akal Takht Sahib, management of Sikh Shrines in the best possible way, upgradation of Sikh educational institutions and to defeat the forces inimical to the panth, they should vote for SAD-Sant Samaj candidates in the general elections to the “Parliament of Sikhs”, the SGPC.
Releasing the Panthic Agenda of SAD-Sant Samaj Combine at the 26th death anniversary of Sant Harchand Singh Longowal S. Badal said that Sikhs have made huge sacrifices and fought numerous battles to get Gurdwaras vacated from the “Mahants”. He said that a number of “Morchas” were organised by the community including Saka of Nanakana Sahib, Panja Sahib, Jaito Morcha, Guru ke Bagh Morcha and Chabian da Morcha besides others. He said that hundreds of Sikhs were martyred, thousands were imprisoned and thousands other were brutally tortured by the British regime.
Describing SGPC as “Parliament of Sikhs” the SAD Patron said that Shiromani Akali Dal has the honour to claim that right from the time of its inception in 1920 till today the sikh masses have always trusted the SAD for the management of sikh shrines.
Releasing the agenda, S. Badal said that people were aware of the fact that right from the establishment of SGPC, the Congress party had always tried to interfere in the religious affairs of the Sikhs with an intention to get the control of SGPC.
Briefing about the document released today  S. Badal said  that  for the information of the masses, the achievements of the SGPC in the last seven years and earlier, have been included with self explanatory photographs of all important educational institutions, sikh missions, Gurmat Vidyalas and Sarai (inns) built for the convenience of pilgrims.
S. Badal complemented SGPC for establishing and described it as a historic achievement of the Khalsa Panth.
S. Badal further expressed satisfaction over the performance of all 110 education institutions run by SGPC and informed that 74745 students are getting quality education at a cheaper rate in these institutions.
Panthic Agenda begins with the three page impressive appeal  of the SAD President S. Sukhbir Singh Badal. In his appeal S. Sukhbir Singh Badal has described the menace of drugs, female foeticide, environmental pollution as the big challenges before the Khalsa Panth. He stressed that there should be a quality school, a well equipped hospital and a nice play ground along with each and every Gurdwara Sahib being managed by SGPC.
S. Parkash Singh Badal said that a long pending demand of direct telecast of ‘Shabad Kirtan’ from Sri Harmandir Sahib has been fulfilled. He also lauded the use of Internet and other modern techniques by the SGPC for preaching  sikh religion.
Disclosing about the future agenda of the SGPC, S. Badal said that apart from establishment and up-gradation of the education institutions, a campaign against the drug abuse, female foeticide and social reform would be a launched by the SGPC. He also said that  in Sikhism in the name of former President of SGPC Panth Ratan Jathedar Gurcharan Singh Tohra would be completed in time. Similarly, the most important job of authentic translation of Sri Guru Granth Sahib, which is under progress, will be completed in the shortest possible time and it would further be translated to different languages so as to spread the message of social equality and universal brotherhood enshrined in Sri Guru Granth Sahib to whole of mankind. He said that SGPC would establish a wonderful Museum with a cost of Rs. 100 crore at Akali Market Sri Amritsar and  Rs. 25 crore would be spent of construction of Sarai (inn) at Saragarhi site. He said that Langar building at Sri Harmandir Sahib is being upgraded with Rs. 20 crore.
Congratulating the SGPC on successful conduct of ‘Khalsai’ sports S. Badal said that sports is the need of the hour and ‘Khalsai’ sports will continue with the same vigour in the times to come for the better future of the sikh youth.