Now there can be no more excuses for inaction or delays 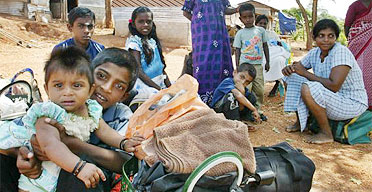 Washington, DC: In reaction to U.N. Secretary General Ban Ki-Moon’s transmission of the findings of his expert panel’s report on Sri Lanka to the Human Rights Council, Amnesty International said:

"For months we have been waiting for the report’s findings to be presented to the Human Rights Council. Now there can be no more excuses for inaction or delays," said Sam Zarifi, Amnesty International’s Asia-Pacific director.

The panel of experts report, made public in April 2011, found "credible allegations" of war crimes and crimes against humanity by all sides to the Sri Lankan conflict.

"The panel of experts produced a strong, credible report - for the first time an international body acknowledged the extent of human rights abuses committed in the last days of Sri Lanka’s brutal conflict, when at least 10,000 civilians were killed," said Zarifi. "It’s time for the Human Rights Council to act on the panel of expert’s findings and hold those responsible for massive atrocities in Sri Lanka to account. The thousands of victims have waited long enough."

Amnesty International also reminded the Human Rights Council of ongoing human rights abuses the organization has documented in Sri Lanka since the conflict ended in 2009. These include lack of humanitarian access to displaced communities, lack of consultation with communities in the resettlement process, and threats to media freedoms.

Amnesty International is a Nobel Peace Prize-winning grassroots activist organization with 3 million supporters, activists and volunteers in more than 150 countries campaigning for human rights worldwide. The organization investigates and exposes abuses, educates and mobilizes the public, and works to protect people wherever justice, freedom, truth and dignity are denied.
# # #
Posted by Rector Kathuria at 23:53 No comments: Links to this post