In the memory of Bagdiji 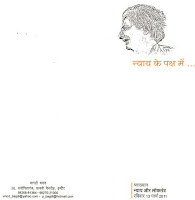 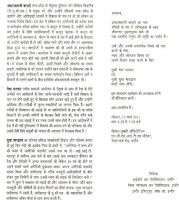 A programme is being organised in the memory of Bagdiji, ex chairperson of M.P. PUCL on 13th March 2011 in Indore. Medha Patkar and Sudha Bharadwaj will be addressing the meeting on the issue of Democracy and Law.
The programme will be held at Golden Jubilee Auditorium hall, SGSITS Engg. College Campus, Indore at 5.30 pm. An invitaion in hindi is also attached.Please click on image to  view the invitation in bigger size. For more detail you may contact:
09893192740 (Vineet),
09827021000 (Pramod),
09424577474 (Ashok)
Posted by Rector Kathuria at 16:45 No comments: Links to this post

KIRTLAND AIR FORCE BASE, N.M., March 10, 2011 - After nearly three years of flight training, an Air Force officer has become the first qualified female pilot of the CV-22 Osprey tilt-rotor aircraft.
"I had two major influences for initially getting interested in flying," 1st Lt. Candice Killian said. "One was my grandfather. He flew civilian aircraft. I never got to see them, because I was too young, but I saw pictures of them at his house and he would tell me stories. The other was a friend who flew. His father was in the Air Force. When my friend went to the Air Force Academy, he encouraged me to learn to fly."
Killian said she went to her local airport to look into flying lessons. Within 18 months, she completed her private pilot's license and decided she wanted to join the Air Force to make a positive difference, serve her country and fulfill her desire to fly. She went to the Air Force Academy to start her training.
"I found out that I was going to fly for the Air Force my senior year at the academy," Killian said. "The undergraduate pilot training track is very broad at first, but you find out where you're going at the academy at what we call '100 days.' It's a dinner and a celebration where they tell you where you're going to go. It's your senior year, and you finally know where you're going."
From the academy, Killian went to initial pilot training at Laughlin Air Force Base, Texas. The initial training, on the T-6A Texan II training aircraft, took about six months and included flight training and academics. After that, she went to Fort Rucker, Ala., to learn how to fly the UH-1 Huey helicopter.
"I knew I wanted to fly helicopters," Killian said. "I like the mission role that helicopters in the Air Force generally fly, the broad spectrum of things we can do. Upon completion of the course at Fort Rucker, you can get CV-22s, UH-1s or HH-60 [Pave Hawks]. The mission of the Osprey is very appealing."
After undergraduate pilot training, Killian was chosen to train as a pilot on the CV-22. The initial training took place in a joint program with the Marine Corps at Air Station New River, N.C. All Air Force CV-22 pilots complete the Marine course, where they are taught general aircraft systems and the basics about flying a tilt-rotor aircraft.
"Working with the Marines was a lot of fun and really fulfilling," she said. "To experience their culture and how they train was awesome. I had the opportunity to be instructed by them and see the different learning styles they used."
After training with the Marines, Killian came here to complete her CV-22-unique mission training with the 58th Special Operations Wing.
"I didn't find out I was the first female pilot until they chose me," she said. "I remember being told, 'You're the first.' It's an honor that they would choose me. It's nice to be a part of this elite organization."
Each pilot who graduates from CV-22 training receives a coin from the commander, with a number signifying where they fall in the training pipeline, said Air Force Lt. Col. Larry Riddick, 71st Special Operations Squadron commander. Killian's number is 97.
"She's done very well in the course," Riddick said. "It's been fantastic having her here, and I look forward to hearing about her career."
From here, Killian will move on to her next duty station at Hurlburt Field, Fla.
"I want to continue to do well," she said. "For all those who have influenced me along the way, I can't thank them enough. Without them, I probably would not be here. I want to thank everyone for their positive guidance."
Posted by Rector Kathuria at 00:58 1 comment: Links to this post

Posted by Rector Kathuria at 00:28 No comments: Links to this post

Posted by Rector Kathuria at 00:21 No comments: Links to this post

Posted by Rector Kathuria at 00:16 No comments: Links to this post