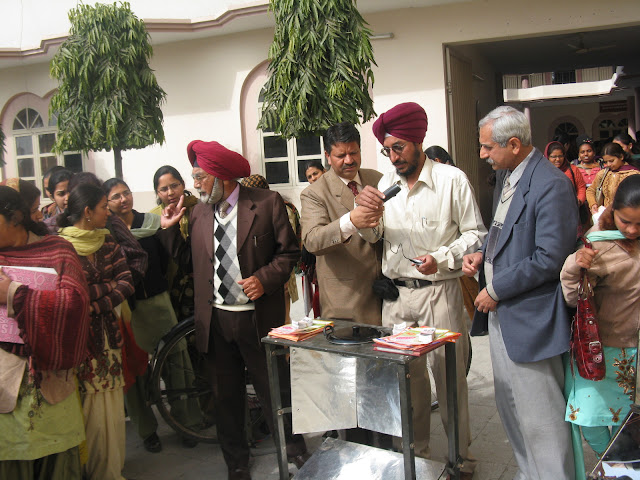 The Bharat Jan Gyan Vigyan Jatha (BJGVJ) Distt. Ludhiana organized an interactive session cum demonstration on energy conservation under the National Environment Awareness Campaign today at GMT College of Education Ludhiana. Highlighting the need of energy conservation President of the Jtaha Maj.Sher Singh Aulukh called upon the students and the faculty members to develop habits not to waste the energy which is so important for a developing country like India. The Jatha will organize lectures cum demonstrations on this issue in several institutions. Dr.Arun Mitra – General Secretary said that renewable energy resources should be utilized to meet our energy needs. India has abundant of solar, wind, biomass, urban and industrial waste and microhydel resources which can be tapped with more Research and Development. Taking a critical view of the pursuit of nuclear energy, he said that this is neither economical nor safe any nuclear accident can lead to havoc as has been seen in Three Mile island, Chernobyl and Fukushima nuclear accidents. On the other side renewable resources are transparent and non hazardous. Sh.Anupam Nanda in charge Punjab Energy Development Authority Ludhiana held a quiz among the students and ask them to use renewable energy resources. He informed about various subsidy schemes by the government. Er.Gurvant Singh – General Secretary Small Scale Industries and Traders Association gave a live demonstration on production of electricity through renewable resources.
Principal of the college Dr.Shikha and Teacher in charge Mrs.Bhupinder Kaur lauded the role of jatha in promoting healthy environment.
Posted by Rector Kathuria at 17:20 No comments: Links to this post