Be aware ….Save The Kidney

Awareness of Kidney Diseases is low with many people totally underestimating the vital role our kidneys play, when in fact kidney damage and disease causes serious morbidity for hundreds of thousands of people, and in some cases leads to death. Chronic diseases – that already account for 72% of the total global burden of disease in people over 30 – will increase by 17% over the next decade; much of this in developing countries like India.
Our kidneys remove toxins and excess water from our blood. They also help to control our blood pressure, to produce red blood cells and hormones, and to keep our bones healthy.
There is a close relationship between kidney diseases, diabetes and hypertension. Worldwide, 246 million people suffer from diabetes and the figure is expected to reach 380 million by 2025. Diabetic kidney disease affects a third of people suffering from diabetes.India has about 50 million diabetic patients and diabetes affects the kidneys in 30-40% patients with renal failure related to diabetes accounting for about 20% of patients on dialysis.  Unfortunately, less than half of those people diagnosed with diabetes undergo a simple screening test for kidney disease.
Kidney diseases are often detected too late, when the patient is already in end-stage renal failure and will need either dialysis or transplantation. Worldwide, over 1.5 million people are undergo dialysis or transplantation and this number is forecasted to double within the next 10 years. In India only a small percentage of people can afford dialysis and transplantation.
A simple way to prevent these issues is to tackle the problem at the source, and ensure early diagnosis of kidney damage by systematically screening people diagnosed with diabetes or hypertension. This can be done with simple and inexpensive urine tests. If detected early, damage can be treated with effective therapies. If diagnosed too late, kidney diseases lead to kidney failure, which entails dialysis and transplantation.
World Kidney Day
Celebrated worldwide onthe second Thursday of March, World Kidney Day offers a crucial, visible opportunity to inform and educate health policy-makers, people who are at highest risk of CKD, and the general public that kidney disease is common, harmful and treatable.
The Department of Nephrology at Christian Medical College, Ludhiana, will be organizing a Kidney Health Camp in the nephrology OPD from 8 - 11 AM on 10th March, 2012, which will include free registration, nephrology and diet consultation, screening urine and blood tests, health education and awareness promotion.Please feel free to check your kidneys especially if you are diabetic, have high blood pressure, smoke, use regular pain medications, are above 40 years of age or have a close relative with diabetes or kidney disease.
For Further Details Please Contact  Dr.Jasmine Das: 9988345898
by Shalu Arora and Rector Kathuria
Posted by Rector Kathuria at 12:45 No comments: Links to this post

He discontinued his studies and was bed ridden 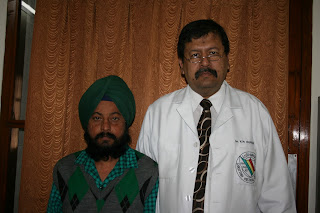 Paramjit Singh runs a Karyana and multi-purpose store at Una, Himachel Pradesh, and supports his wife and two children. He has perfect health now and eats normal food considering the illness he suffered during his adolescence, 21 years ago. At the age of 17, in 1990, he was diagnosed to have end stage kidney failure and he was dependent on hemodialysis for his survival. Due to his kidney failure, he discontinued his studies and he was bed ridden for a while. He used to get hemodialysis three times a week at CMCH. Why would fate strike a person in his youthful age of 17? Is this God’s punishment to me and my family? These were the thoughts that went through his mind while he went through the ordeal of hemodialysis for his end stage kidney failure? His father, Rattan Singh, was a Police Officer and he decided to donate his kidney for his son. 27-August-1991 was the long awaited day he dreamt of to receive the “Gift of life” from his father. Parmajit Singh underwent successful kidney transplantation at CMCH. Dr Kim Mammen, Professor & Head, Department of Urology & Renal Transplant Surgeon had performed the renal transplant operation for Paramjit Singh. This was the first ever successful renal transplant surgery performed at CMCH. This was also Dr Kim Mammen’s first renal transplant operation of his career. Recalling the experience of his first renal transplant operation, Dr Mammen confessed that he displayed his best surgical skills in getting the first ever renal transplant operation at CMCH go right and perfect. God’s choicest blessings and a good team-work was the Mantra for the successful operation. The check list he had made for every step of the procedure went right, Dr Mammen confessed 21 years later.

Soon after the kidney transplantation operation, Rattan Singh [Father] was thrilled to know that his donated kidney was working perfectly well on his only son. This was the greatest gift a father could ever give to his son. Rattan Singh recovered well after the operation and he went home six days after the operation. Paramjit Singh was discharged two weeks after the renal transplant operation with normal kidney function. It was a dream come true for Paramjit Singh when he experienced a urine output of more than two liters a day. Before the renal transplant operation, he was passing less than 100 ml of urine in a day and that too with hemodialysis three days a week. Before the operation, he had dreamt to pass urine in good volumes and he was uncertain whether he would fulfill this dream. Paramjit Singh stayed in Ludhiana for a month after the renal transplant operation for getting regular check-ups and blood tests done. A month later, he returned to Una and he started to do part-time education.

Three years after the successful renal transplant operation, Paramjit Singh got married and he now has two children. Paramjit Singh has led a happy married life and his children are excited that their dad is leading a normal life after 21 years of his renal transplant operation. He has had minor ailments and infections which were promptly treated by the CMCH Doctors. Presently Paramjit Singh comes for regular check-ups every two months. Paramjit Singh continues to work as a motivator and promoter for renal transplant surgery and he has proved that this is the only salvation for patients with end stage kidney failure who are totally dependent on hemodialysis. He is indebted to the doctors and nurses of CMCH who looked after him during and after the kidney transplantation operation.

As the world celebrates the “World Kidney Day” Paramjit Singh proudly said “I am a true beneficiary of the Gift of Life by kidney donation and I am now cured of the end stage kidney disease. I was once destined to die but now, I am determined to live. Thank you kidney transplantation and thank you CMCH for the gift of life.” {Issued on:Dated: 07-Mar-2012}
Compiled by Dr Kim Mammen,
Professor & Head, Department of Urology,
Renal Transplant Surgeon,
Christian Medical College Hospital, Ludhiana.
Posted by Rector Kathuria at 08:45 No comments: Links to this post

Former Marine Gets Medal For Heroism

MARINE CORPS AIR STATION CAMP PENDLETON, Calif., March 6, 2012 - With some prodding from his son, Charles P. Barrett Jr. finally received the recognition the Marine Corps says he was due for his actions 60 years ago.
On May 13, 1951 during the Korean War, then Marine Corps Cpl. Barrett was on refueling duties for a night combat operation when his fuel truck caught fire.

Rather than jump out of the burning truck, Barrett successfully drove it off the airfield, through a construction barrier and clear of all munitions before exiting the vehicle.
"His loyal devotion to duty in the face of great personal risk was in keeping with the highest traditions of the Marine Corps and the United States Naval Service," according to the Navy and Marine Corps Medal citation signed by Navy Secretary Ray Mabus.
Barrett's prompt action and courage was recognized because of his son's diligence.
"Three years ago, I found his service records in his shed, and saw that he had all these medals and awards," said Charles P. Barrett III. "I finally said, 'Dad, you have to tell me what you went through.'"
Among other stories, Barrett told his son that paperwork had been completed saying he rated the Navy and Marine Corps Medal, but it was missing from his service record. His son began writing to Headquarters Marine Corps and military historians to track down a copy of a citation found in a storage box indicating he did rate it.
"By his prompt action and courage, he avoided the disaster which would undoubtedly have resulted from the subsequent explosion of the truck's cargo of gasoline which, due to his foresight, occurred without injury to aircraft or personnel," according to the citation.
Closing the award ceremony, Barrett passed on words of wisdom to the attending Marines.
"We had a good, tight group of people that knew the seriousness of our mission and lived it safely," Barrett said. "I have it in my mind that the Marine Corps is that way today. I see it and nobody's going to tell me any different."
Posted by Rector Kathuria at 00:50 No comments: Links to this post