In solidarity with fasting activists in Idinthakarai

Nationwide Protests in support of Anti-Nuclear struggle in Koodankulam
March 26, New Delhi : National Alliance of People's Movements (NAPM), Coalition for Nuclear Disarmament and Peace (CNDP), Lok Rajniti Manch and Delhi Solidarity Group, is  organising a protest and fast from today 26 March 2012 till 1st April 2012, at Jantar Mantar, New Delhi, in solidarity with ongoing fast by activists of the anti-nuclear movement at Idinthakarai, Tamil Nadu against the Koodankulam nuclear power plant.NAPM National Convener and noted Social activist Sandeep Pandey is sitting on a seven day fast.
In Chennai too people are fasting in support of anti-nuclear movement in Koodankulam. In Mumbai, noted film-maker Anand Patwardhan is leading a protest in front of Dadar Railway Station.
On 27th March, 2012, one day fasts will be organised at many places in support of the local people protesting against the Koodankulam nuclear power plant. NAPM Andhra Pradesh is organising a protest demonstration and candle light vigil between 6 to 8 pm on 27th March at Ambedkar Statue, near Tankbund, Hyderabad.
It is ironical that India has raised the issue of atrocities on Tamil people in Sri Lanka at UNHRC but is not relenting its nuclear power pursuit which potentially puts its own Tamil people at grave risk of nuclear tragedy in times to come.
We strongly condemn the undemocratic manner in which nuclear energy is forced upon us. Not only Indian government has used a strong hand to snub the People’s Movement Against Nuclear Energy (PMANE) in Koodankulam, Tamil Nadu, but also is trying to intimidate and stifle resistance by misleading allegations of a ‘foreign hand’. Dr Udayakumar who leads PMANE has declared his personal assets and he has no FCRA account to receive foreign money. Whereas it is clear that Indian government is working hands-in-glove with bigger ‘foreign hands’ of USA, Russia and other countries in its joint military operations and expanding nuclear programme.
The latest attempt by the CM of Tamil Nadu to brand S.P. Udayakumar as a naxal clearly shows the desperation of the government. We condemn such underhand tactics and attempts by government to mislead general public.

It is the people in Europe and America that have forced their governments by coming out in large numbers on street to abandon nuclear energy. But Indian government is trying to stifle such people’s initiatives to have their say. Our claims of being the largest democracy prove to be hollow.

Recent nuclear emergency in Japan leaves no doubt that this world needs to renounce nuclear power for military and civil/ energy purposes, as soon as possible, to put an end to any further catastrophe in the name of 'energy', 'security' or 'technology'. Nuclear power is clearly the most dangerous options for civil or military use. Countries that have been using nuclear power such as Germany have resolved to abandon nuclear energy by 2022. Japan, USA, and many such nations who were earlier pursuing nuclear energy option are having second thoughts now.

We believe that India should adopt the futuristic energy policy like Japan and the European Union (EU) relying on renewable sources of energy which are non-polluting. Like EU and Japan, India too should aim for a low-carbon energy production system. India’s future energy policy should be low carbon and no nuclear.

We appeal to the Indian government to support dialogue on nuclear energy in a democratic way and until there is a consensus on whether India should go ahead with nuclear programme or not, should stall all nuclear programmes.
National Alliance of People's Movements, Coalition for Nuclear Disarmament and Peace, Lok Rajniti Manch and Delhi Solidarity Group.
For more details contact : P.K. Sundaram, 9810556134, Ramesh Sharma, 9818111562, Madhuresh Kumar, 9818905316 and Vijayan M J 9582862682.
***************************
Posted by Rector Kathuria at 18:45 No comments: Links to this post 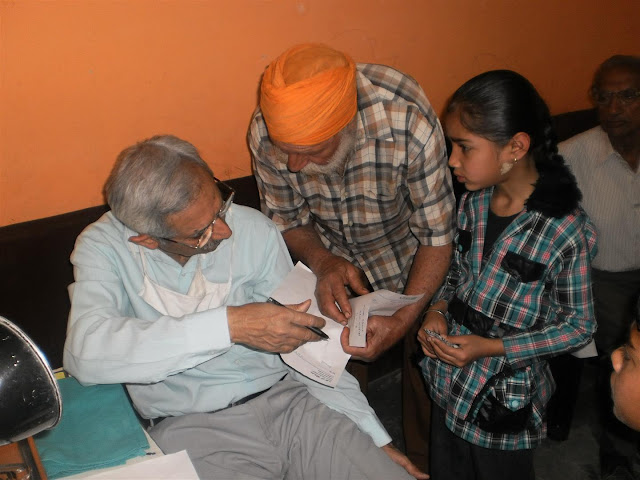 The Bharat Jan Gyan Vigyan Jatha (BJGVJ) Haibowal Branch Ludhiana in collaboration with Indian Medical Association Ludhiana and coordinated by Voice of Youth Foundation  held a Free Medical Checkup Camp dedicated to the memory of Shaheed Bhagat Singh, Rajguru and Sukhdev on their 82nd martyrdom day at Shaheed Bhagat Singh Public School, Haqiqat Nagar, Haibowal Kalan, Ludhiana. 188 patients were examined by Dr Arun Mitra ENT Surgeon and Dr.Anakhveer Singh Gill. 20 patients were fitted the free hearing aids after checking their hearing levels. Addressing the gathering Dr.Arun Mitra said that the real tribute to the martyrs is to create a society based on justice and equality to all citizens. He said the quality health care and education is the right of all citizens. Such camps are a miniscule contribution in that direction. He also gave health education about prevention of diseases related to Ear, Nose and Throat. Other who addressed the gathering include Sh.M.S.Bhatia, Maj.Sher Singh Aulukh, Mrs.Gurcharan Kocher, Shri.G.S.Narula, Sh.Harbhajan Singh Bhatia, Sh.Ashish Moliry – Vice President of Voice of Youth Foundation. Mrs.Rajinder Kaur Bhatia – Principal of the school in her thanks giving address appreciated the help extended by Punjab Bank Employees Federation Ludhiana and assured that such like camps will be organized in the future also.
Others who make the function success included Sh.Bhajan Singh, Sh.Avtar Chibber, Sh.Rajesh Verma, Sh.B.D.Saini, Sh.Sunil Grover, Sh.Gulshan Gaba, Sh.Harvinder Singh Obrai, Sh.Prem Grover, Sh.Ramadhar Singh,
Posted by Rector Kathuria at 17:45 No comments: Links to this post