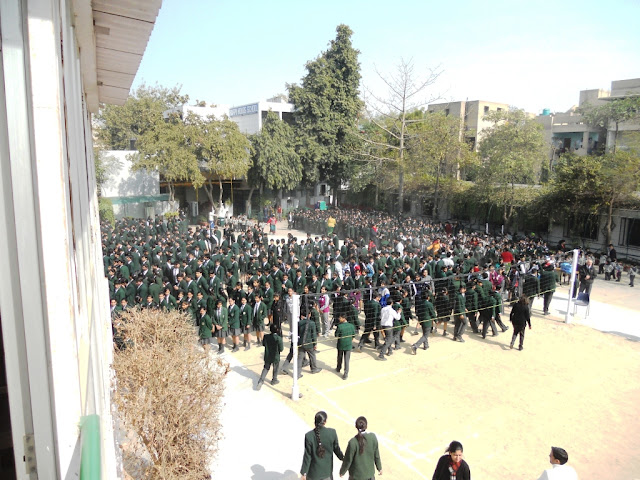 KIIT World School, Pitampura was a part of the Delhi Wide Mega Mock Drill on Disaster preparedness, which was conducted at 11:30 a.m. on 15th February, 2012.The Students, Teachers, Office staff and others had been briefed about the evacuation process in advance. The evacuation plan was placed at prominent places in the school. Also, graffiti walls were placed on each floor where students displayed their creativity to create awareness on disaster preparedness. On hearing the fire hooter, 1600 students of classes 6 to 12, along with their accompanying teachers gathered in the school ground in just 1 Min. Visitors, external examiners present in the school also became a part of the drill and evacuated the building along with the others. A head count was taken both by the accompanying teachers and group monitors immediately after the drill.
The Mock Drill was conducted most efficiently and there was perfect synchronization between one and all. The students moved in multiple lines along the corridors, as per instructions given.The school takes pride in stating that such drill forms a regular feature of the school activities and are conducted on a monthly basis.The School Principal Dr. Sangeeta Bhatia addressed everyone and sensitized them about preparedness at all times for eventualities and disasters.
Posted by Rector Kathuria at 15:22 No comments: Links to this post