They will be bundled out--Indian Americans 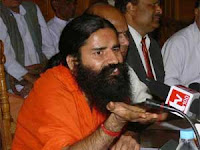 Narain Kataria from New York: Indian Americans are deeply disturbed and shocked at the forceful eviction/arrest of Baba Ram Dev and attack by 5000  policemen on thousands of peaceful Indian citizens in Delhi.  They consider it a dangerous attack on democratic setup in India.
Baba Ramdev’s intent behind this movement is to bring back approximately 9 trillion dollars  stolen from poor Indians and stashed in foreign countries; and he is determined to reverse this awful trajectory.
The petulant arguments advanced by the corrupt Government for its diabolical action against peaceful volunteers that Baba Ram Dev’s campaign against corruption would have caused a law and order problem does not hold water, and is an insidious attempt to cover up its hidden agenda to crush the movement.
That thousands of people from all over India should respond to the call of Baba Ramdev for removal of corruption from India, and come to Delhi and fast, is symptomatic of a deeper malice afflicting 1.2 billion Indians.
Baba Ramdev’s allegation that there was a sinister conspiracy to kill him has to be investigated by the Central Bureau of Investigation.    The reign of repression let lose against thousands of peaceful men, women and children by 5,000 Delhi policemen should be vehemently condemned with the contempt it deserves.  It is a naked fascism as practiced by dictators in Middle Eastern countries.
Recently, India’s home minister, P. Chidambaram, said that more than 900 people, including almost 600 civilians were killed in Maoist-related incidents in 2009.
Since 2005, Islamic terrorist attacks have killed 780 people in India.    (http://islamicterrorism.wordpress.com/2010/02/15/islamic-terrorist-attacks-have-killed-780-in-india-since-2005/)
It is a matter of great regret and shame that deadly Islamist-Leftist combine carrying on a corrosive covert war to destabilize and deracinate India is treated with kid gloves,  and peaceful nationalists like Baba Ramdev are treated like a criminal!
It is not only unbecoming but also below the dignity of some politicians, who, in their eagerness to please their Queen, are using unparliamentary, dirty, disgusting and foul language against Baba Ram Dev who is adored by millions in India.  These politicians have been marked by Janata (people) and will have to pay heavily in the next elections for their misdemeanor against a Saint.
Sonia Gandhi and her cronies will rue the day they chose to heap the brutalities on hapless and peaceful Indian citizens who were exercising their fundamental right to express their legitimate opinion against their rulers who have indulged in the massive plunder of India since Independence.  Sonia Gandhi should also remember that India is not the fiefdom of her family.

If,  by inflicting savageries on peaceful but united Indians, Sonia Gandhi Government believes  that it can demoralize and consequently terrorize Indian citizens into submission, she is sadly mistaken.
We know that Sonia Gandhi  is a devout Catholic. She rules India through remote control and with an iron hand.  Indian tradition and culture enjoins on Indians to respect her religion.  At the same time, it is incumbent on her not to misuse her political authority to crush peaceful Indians who demand accountability for billions of dollars stolen from them!  Sonia Gandhi has been completely exposed by now.  According to Rocky Saggoo’s blog - posted on February 22, 2011,  Wikipedia says that  Sonia Gandhi has $18.66 billion in Swiss Bank accounts. She should see the writing on the wall otherwise she may have to quit India.
The Indians are determined to take back Government of India from their corrupt rulers. Make no mistake; they are waking up silently, slowly but surely.  And they are not going to stop till the goal is reached.
The Dharm Yuddh (the battle for righteousness) started by Baba Ramdev  on June 4th,   will result in the decimation and doom of corrupt Dynasty in the next general elections.  The world will soon witness the spectacle of rapid and inexorable rout of  Sonia Gandhi and its cronies.  The corrupt ruling politicians and their buddies  will suffer cataclysmic consequences for their egregious violations of Human Rights against humanity.  They will be bundled out and thrown in the dust bin of History like other  tyrants  who unleashed unprecedented atrocities on Indians.
Posted by Rector Kathuria at 12:27 No comments: Links to this post