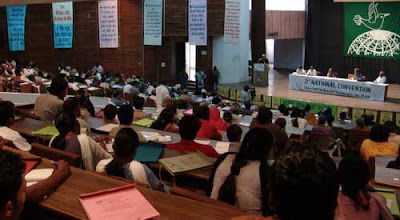 The 4th National Convention of the Coalition for Nuclear Disarmament and Peace (CNDP), India, was held on the occasion of its 10th anniversary from 10th to 12th December 2010 in Delhi. The theme of the convention was Towards a Nuclear Weapon Free World. On 9th Dec there were cultural programme and prize distribution ceremony at the convention’s venue constitution club, organized by CNDP, which was attended by the students, teachers and parents of various schools of Delhi and other states. The musical performance by the Meer community from Rajasthan has attracted the audience intensely. Well-known peace activist Lalita Ramdas distributed the prize. An exhibition of paintings and poetry prepared by students, who took part in the competition organized by CNDP, was also organized at the venue by ANHAD and CNDP jointly.

In the convention, issues such as Global and Regional Nuclear Disarmament, West/Central/South Asia: War and Militarization, Nuclear Energy and Climate Change, Uranium mining, health and radiation were addressed by noted peace and anti-nuclear activists such as Mani Sahkar Aiyar, Admiral Ramdas, Lalita Ramdas, Ilina Sen, Achin Vanaik, Sukla Sen, Anil Chaudhary, N D Jayaprakash, Anuradha Sen, Amarjeet Kaur, Praful Bidwai, Pankaj Bisht, Kavita Srivastava. M V Ramana, S P Udayakumar, Kamal Mitra Chenoy, Anuradha Chenoy, Ghanshyam Biruli, Shripraksh, Pradip Datta, Debashish Shaimal, Gopal Krishna, Suvrat Raju, Karuna Raina. Paece Activist Karamat Ali (Pakistan), John Hallam (Australia) and Doctors from IDPD were also present in the various sessions and workshops. The convention saw the presence of a number of activists engaged in the anti-nuclear movements in the different parts of the country.
On the 3rd day of the convention, the Delhi Declaration was passed by the delegates from different parts of the country. Through the Delhi Declaration, the CNDP reiterates its commitment to a Nuclear Weapon Free World. In this context, CNDP also reaffirms its  commitment to upholding the essence of Prime Minister Rajiv Gandhi’s action plan "Towards a Nuclear Weapon Free and Non-Violent World Order”, which was submitted to the UN General Assembly on 09 June 1988. And in tandem with that, CNDP joins its voice with global peace movements in demanding an early convening of a global Nuclear Weapons [Abolition] Convention to work out the detailed road map for universal nuclear disarmament. --Sukla Sen
Posted by Rector Kathuria at 22:21 No comments: