Face of Defense: Captain Cares for Pets Left Behind

By C. Todd Lopez
Army News Service
WASHINGTON, March 16, 2011 - On Jan. 25, Egyptians began protesting against the government of then-President Hosni Mubarak. By Feb. 1, the U.S. State Department had ordered the departure of all nonemergency U.S. government personnel and their families from Egypt.
But not all "members" of the families departed. The four-legged ones stayed behind.
"A lot of people had pets that they really didn't have a good plan for being taken care of in the event of evacuation," said Army Capt. Eric Coulson, who works in office of military cooperation at the U.S. Embassy in Cairo as part of a team that manages nearly $1.3 billion in annual aid to the Egyptian military. "And the vets and the kennels here were kind of overwhelmed."
Coulson's wife, Karen, left Egypt -- but he and the couple's two dogs, Molly and Sayeret, stayed behind. Coulson and a fellow soldier at the embassy, Army Maj. Alavora Roa, teamed up to take care of those pets that were left behind when their owners departed the country.
"We sort of organized an emergency kennel for all the people who didn't have a place to put their animals while they were being evacuated," Coulson said. "We sort of reached out to people we knew had animals."
In all, Coulson and Roa found themselves running an impromptu pet hotel for about 20 animals, scattered among the deserted apartments of their coworkers who had evacuated. The two checked in on their co-workers' apartments and also stopped in to feed and walk the animals.
One co-worker, Coulson said, had a fairly large roof available on his apartment, and they kept several animals there.
"We consolidated them at the apartment of one of the other persons involved in this -- he has a large roof, and we put them on the roof with some shelter with large water bowls and large food bowls, and we took turns taking them out."
Coulson said the local Purina distributor in Cairo made a generous donation of supplies to keep the kennel operating.
"Most of the people who were leaving told us where to pick up dog food," he said. "The local Purina dealer did give us a couple hundred pounds of dog food, as well as cat litter and cat food. Between what people had and a generous donation from the Purina dealer here in Cairo, we've been able to take care of the animals at minimal expense."
Now, several of the pet owners have come back to Egypt, Coulson said, and some of the pets have been shipped back to their owners. Coulson's pet boarding days eventually will be a distant memory, but the events in Egypt will stay fresh for a while, he said. The speed at which events in Egypt unfolded was thrilling, he said.
"It went from probably about 10 miles an hour to 60 miles an hour in just a matter of days," he said. "It was absolutely interesting to watch -- to be in the middle of history."
The recent events weren't the first time Coulson has been struck by historical change in Egypt. He was just 13 when President Anwar Sadat was assassinated -- old enough to be able to gauge the impact and significance of what had happened.
"That was sort of one of my first big memory of things in the news -- of what we had as far as 'wall-to-wall coverage' back in 1981," he said. "I remember being riveted by the TV.
"The two transitions of power in Egyptian history that have taken place in my life are really sort of important memories to me," Coulson added.

Posted by Rector Kathuria at 22:17 No comments: Links to this post

Posted by Rector Kathuria at 21:48 No comments: Links to this post

WASHINGTON, March 14, 2011 - My 7-year-old son came home from school the other day and told me another boy had called him fat -- several times. My heart sank as I struggled for the right words to comfort my son, and promised to call the teacher on his behalf.
While I was upset with the boy who called my son a name, I was even more upset with myself.
My son is overweight, obese by the doctor's standards, (see the blog I wrote last year) and I don't think I've been doing enough to help.
Months earlier, I had pledged to make over our sometimes-unhealthy family lifestyle after the pediatrician noted an upward trend on my son's weight chart.
I started with the best of intentions. For months, I worked at increasing the variety of fruits I picked up each week at the store. But recently, I've noticed my tendency to sneak a few of my family's not-so-healthy favorites -- doughnuts, ice cream and candy, to name a few – into the cart. And down deep, I know my son is going to opt for the sweets over the healthy treats when I'm not looking.
I've encouraged my son to be more active, but that, too has waned in the winter months. The TV's siren call is hard for him to resist, and I've been growing more lax with my TV cutoff times. He's not getting enough exercise, and I'm the one who's ultimately responsible.
It's not about his appearance; it's about his health.
Studies show that about 80 percent of children ages 10 to 15 who were overweight became obese by age 25, Public Health Service Cmdr. (Dr.) Aileen Buckler, TRICARE population health physician, told me in a recent interview. And children who are overweight before age 8 are more likely to have more severe obesity as an adult, which can lead to greater risks of cardiovascular disease, stroke, certain types of cancer, osteoarthritis and even infertility.
To make matters worse, America's childhood obesity rates have tripled in the past 30 years. Today, nearly one in three American children and about one in four military children are overweight or obese.
The topic recently has been highlighted in the news, mostly due to First Lady Michelle Obama's efforts with the "Let's Move" campaign, which encourages people to adopt a healthier lifestyle through healthy eating and exercise. The Defense Department also is working to help families with this pervasive issue, which I wrote about in the American Forces Press Service article, "DOD Takes Steps to Combat Childhood Obesity."
For example, officials are creating standardized menus for child development centers to ensure the centers are meeting children's nutritional needs, Barbara Thompson, of the Pentagon's office of military community and family policy, told me. They're also working with vendors who supply the centers' food to ensure they're getting the freshest vegetables, lower-fat cuts of meat and less processed food laden with fats, salt and sugar.
But the Defense Department can't do this alone, Thompson said. Adults need to be good role models. She summed up a healthy family goal with the aid of a few numbers: five-two-one-zero. People, she explained, should aim for five servings of fruits and vegetables a day, two hours or less of screen time, one hour of physical activity and zero sugary drinks.
Sounds like good advice. I need to start opting for granola bars over candy bars and frozen yogurt over ice cream. And it's time to encourage my son once again to pick up an activity that won't involve a remote control or joystick. That will, at least, be a start.
Are you struggling with a similar issue? If so, don't hesitate to write in with your lessons learned or greatest challenges.
In the meantime, for more information on a healthy lifestyle, visit a service health and wellness facility, check in with a base fitness center or visit the Let's Move campaign website or Military OneSource.

Posted by Rector Kathuria at 21:46 No comments: Links to this post 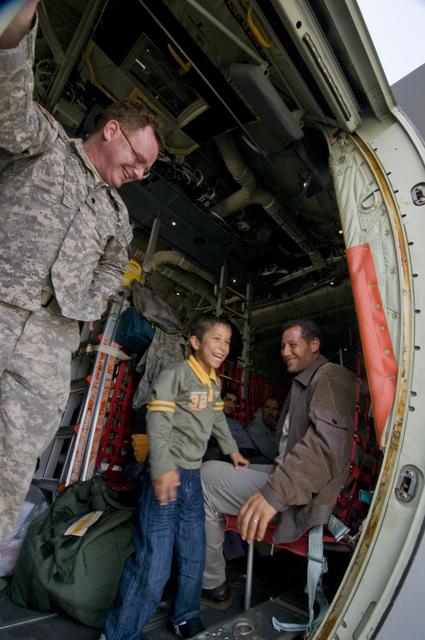 U.S. Army Spc. Neil Stanfield, left, shows an Egyptian boy around the U.S. Air Force WC-130J Hercules aircraft assigned to the 37th Airlift Squadron that will fly them from Djerba Zarzis Airport in Tunisia to Cairo, Egypt, March 13, 2011. This response to the developing humanitarian crisis was part of an international effort to repatriate tens of thousands of refugees fleeing the escalating violence in Libya.


(DoD photo by Staff Sgt. Brendan Stephens, U.S. Army/Released)
Posted by Rector Kathuria at 08:52 No comments: Links to this post

Ludhiana :Continuous upgradation of knowledge and technology is making therapy of previously difficult to treat diseases easier and safer. Dr Harinder Singh Bedi – Head of Cardio Vascular & Thoracic Surgery at the Christian Medical College and Hospital Ludhiana – stated that there has been the invention of a new generation of stents called multilayer stent. This is used in a condition called an  aneurysm of the aorta where there is a balloon like dilatation of the aorta (main artery of the body) with the origin of arteries to the vital areas of the body eg brain, kidney etc taking origin from this diseased part of the aorta. The usual treatment was either a surgery or the use of a special procedure called a chimney procedure which is both very expensive and technically demanding. Dr Bedi is credited with the first hybrid endovascular procedure in a previously operated patient (published as a world first surgery in the internationally indexed Heart journal).
Dr Bedi was part of the invited faculty at the recently concluded prestigious Asia Pacific Vascular Intervention Conference III in New Delhi. The other faculty included Dr Michel Henry (France), Dr TJ Collins (USA), Dr Donald Reid (Scotland), and Dr T McNamara (USA).  Dr Bedi was invited in view of his pioneering work in vascular and endovascular surgery. He delivered a guest lecture and presented some rare teaching cases which were greatly appreciated by the learned audience.
Dr Bedi said that the new multilayer stent has a unique   design, and by virtue of its 3D geometry, reduces flow velocity within the aneurysm vortex while improving laminar flow in the main artery and surrounding vital branches.  This allows for pressure reduction within the aneurismal sac, stasis and the formation of an organized thrombus leading to the dangerous sac being excluded from the circulation. This happens without blockage of the vital branch arteries. Dr Bedi predicted that this stent will revolutionise the therapy of aneuryms with a great benefit to the patients.
Dr Abraham G Thomas – Director of CMC & H – said that the CMC was committed to delivering International level care of the highest quality to the people of this region.--Rector Kathuria & Shalu Arora
Posted by Rector Kathuria at 00:18 No comments: Links to this post