DP Maur has a glorious record of serving the people 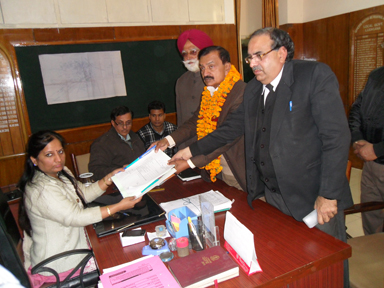 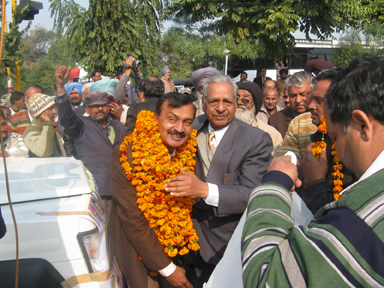 SANJHA MORCHA candidate of Communist Party of India (CPI) Com Dharam Pal Maur filed his nomination papers today for the Ludhiana West constituency.He was accompanied by S.Jagjit Singh Ghungrana – General Secretary PPP, Com Naval Chhiber– Advocate, Former President  Bar Association Ludhiana, Sh.Rajesh Gandhi–Member PPP State General Council, Dr Pawan Garg, S.Manjit Mehram. On the occasion a rally was organized which was addressed by Dr.Joginder Dyal – Member Central Executive Committee CPI, Com Kartar Singh Bowani – Distt. Secretary CPI, Com Sukhminder Sekhon–Distt. Secretary CPI(M), Dr Arun Mitra–Former President IMA Ludhiana and Com Ramesh Rattan – City Secretary CPI.
Dharam Pal Maur has a glorious record of serving the people of the area. He remained President of the PAU Employees Union continuously for 12 years by winning 6 bi-annual elections in a row from 1995 to 2007. He is presently General Secretary of the Joint Council of Trade Unions which comprises of 17 unions/associations of Ludhiana including bank employees, hospitals, construction workers, government employees, PAU, school teachers, Class IV employees, roadways and railways employees. Besides he is also involved in various social activities like promotion of healthy environment, traffic management, uplift of the lower economic strata through basic education.
Dr Dyal in his address said that the agenda of the Sanjha Morcha including of PPP, CPI, CPI (M) and Akali Dal Longowal is to establish rule of law and to take Punjab out of the serious debt of Rs.138000 crore as a result of wrong policies of the alternate congress and Akali-BJP governments. The people this time have a choice in the form of SANJHA MORCHA. The Morcha started its election campaign from the Jallianwala Bagh with a promise to meet the aspirations of the people.
The Morcha will fill all the vacant posts in government/semi government departments on regular basis and not on contract basis. Unemployment allowance of Rs.2000/- per month will be paid to the unemployed. Quality Education and health care to all will be  the priority. Small scale industry will be given preferential treatment for its development. Taxes on the raw material from other states will be reduced to the benefit of small scale industry. Tax collection system will be made easy and taxes will be reduced. Special schemes will be made for small shopkeepers and vendors. Special attention through budgetary will be given for development of Punjab Agricultural University (PAU) and Guru Angad Dev Veterinary Sciences University (GADVASU) for solving their financial crunch. The policemen engaged in serving the VIPs to be taken off to serve the common people. To ensure safe working conditions for women in form of working women hostel, crèches and stringent laws against those indulging in nefarious activities against the women. Morcha will pay special attention to the promotion of healthy environment in the state. Special schemes will be made to care for the elderly and widows & widowers. To promote healthy cultural values. Effective steps to be taken to promote tourism in Punjab.
Dharam Pal Maur in his addressed assured the electorate of his service at all the times. His priorities for the area would be to sort out traffic problem in Ludhiana with special attention to the needs of pedestrians, cycle & rickshaw riders. Housing would be made affordable and special housing colonies will be developed for the low income group. Proper remuneration to the workers in various sectors. Proper facilities to be provided to the Safai  Karamcharis and sewer men.
Posted by Rector Kathuria at 18:45 No comments: Links to this post

Change in the Election Schedule

First phase of UP Assembly Election, 2012
Posted by Rector Kathuria at 00:45 No comments: Links to this post


Fifteen Cities to have This Service Initially
MoU will be Effective from February 1, 2012
India Post today signed an MOU with Air India for carriage of “Logistics Post Air” Service by Air India. This service will help the customers to send their consignments to different parts of the country, especially to the North-Eastern region without difficulty. This MOU will meet the huge demand for Logistics Post Air Service for hassle free dispatch of consignments to different parts of the country including the North East.
India Post in collaboration with Air India plans to start this service from 15 cities initially to meet the demand from the customers. These cities are Ahmedabad, Agartala, Bangalore, Chennai, Delhi, Guwahati, Hyderabad, Imphal, Kolkata, Lucknow, Mumbai, Nagpur, Patna, Pune and Trivendrum. Of these, three are in the North East.

India Post will deliver the consignment of Logistics Post Air to Air India at the point of delivery of the departure station and will also collect it at the arrival station. Booking, handling, packing, delivery etc. will be done by the India Post. Air India will only transport the consignment from one station to another station.

This service will be extended to other cities in a phased manner.

Posted by Rector Kathuria at 00:15 No comments: Links to this post