CONTINGENCY OPERATING BASE ADDER, (Iraq) : Iraq may not be ready for PayPal, but with the help of the U.S. Army, the southern Iraqi provinces of Dhi Qar, Maysan and Al Muthanna are moving closer to a cashless system in order to deal with the mounting costs of dealing with cash. 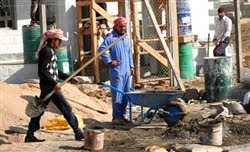 Task Force Pathfinder is increasing its use of electronic funds transfer as a better way to pay local contractors and vendors instead of in stacks of Iraqi dinar. The transactions are part of the unit's role aiding the State Department's Provincial Reconstruction Teams as they build up the Iraqi civilian infrastructure.

Officials are pursuing the change to electronic transfers as a way to save money and reduce the security risks associated with transporting funds. Also, they say, electronic transfers increase public confidence in the Iraqi banking system, which gets a boost with every deposit.

Today, the U.S. Army brings an estimated $42 million in currency into Iraq and Afghanistan monthly, down from $192 million per month this time last year and as much as $400 million a month in 2003. With the development of new banks, including one nearing completion on base here, transferring funds electronically is becoming the preferred method of payment.

When paying for reconstruction projects with hard currency, the cost to the Army is about $32 per payment – nearly all of which goes to security costs -- compared to $2.50 per electronic transaction. Changing to an all-electronic transfer system of payments is expected to save the Army about $20 million annually.

Task Force Pathfinder's paying agents have handled more than $14 million in both dinar and electronic disbursements with local contractors and vendors in Maysan, Al Muthanna and Dhi Qar provinces in the past eight months. Another $21 million is approved and pending future payments for local humanitarian assistance projects. Most of this is to be paid via electronic transfer.

The Army would like to move to electronic money transfers for reconstruction contracts, but it isn't easy convincing Iraqi businessmen that an electronic receipt is going to pay them when they always have received bundles of cash. Contractors need reassurance that the process works. That means both soldiers and program managers must be well versed in the process and understand everyone's responsibility to ensure efficiency.

"We process the [payment] request and send it up within the first 24 to 48 hours," he said. "Then, Baghdad releases a voucher number. At this point, it takes five to seven days for the payment to reach the contractor's account."

Not only is the finance company a resource, but there also is an EFT Assistance Center, created and funded by the task force to serve as a help desk to stakeholders in Iraq's newly introduced payments system.

Since October 2008, the assistance center has resolved more than 150 payment problems totaling more than $15 million. The center also, provides monthly statistical analysis of the most common electronic payment problems within Iraq, and communicates the causes to Joint Contracting Command-Iraq, Defense Finance and Accounting Service, and other agencies.

The Army is working toward going cashless within the year for contracts with local vendors, Brig. Gen. Phillip E. McGhee, director of resource management for U.S. Army Central Command, said.

As Task Force Pathfinder soldiers continue their efforts to build civil capacity in southern Iraq, "the transition to electronic funds transfers is a welcomed sign of progress that has the added benefit of saving the U.S. government money," added Lt. Col. Mike Eastman, task force commander.


Posted by Rector Kathuria at 23:59 No comments: Links to this post