You cannot kill the ideas--Bhagat Singh 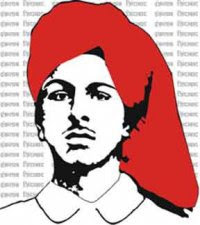 Bhagat Singh was an Indian freedom fighter, considered to be one of the most influential revolutionaries of the Indian independence movement. He is often referred to as Shaheed Bhagat Singh.

Bhagat Singh was known for his appreciation of martyrdom. His mentor as a young boy was Kartar Singh Sarabha. Singh is himself considered a martyr for acting to avenge the death of Lala Lajpat Rai, also considered a martyr. In the leaflet he threw in the Central Assembly on 9 April 1929, he stated that It is easy to kill individuals but you cannot kill the ideas. Great empires crumbled while the ideas survived.
This Announcement came from Diep Saeda. a known revolutionary in Pakistan. Programme devoted to S. Bhagat Singh will be held at
Posted by Rector Kathuria at 01:20 No comments:

Posted by Rector Kathuria at 00:07 No comments:

Posted by Rector Kathuria at 00:06 No comments: