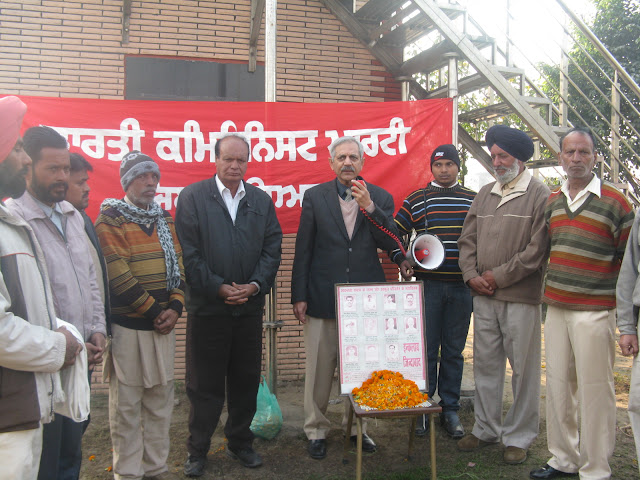 A rally was organized at the Jagraon Bridge to pay homage to the freedom fighters, Ashfaqullah Khan, Ram Prasad Bismil and Roshan Singh Thakur who were hanged by the British on 19th December and Rajinder Lahiri who was hanged on 17th December 1927  in the Kakori case. Participants  garlanded the Photographs of the martyrs  and then held a rally. Various speakers, while reminding the struggle waged by the great people, who did not refrain from laying down their lives for the cause of the country, said that they had dreamt of free secular, democratic India where all people enjoyed equity, justice  and human rights without any linguistic, regional or gender bias and have access to  necessities of life including health and education. But unfortunately this has not happened in the last 64 yrs of independence. Whereas we have grown in terms of technology and wealth, the gains of this development have gone to a few. India has gone further down to 132nd  position in the Human Development Index as per the report published by  the United Nations Development Programme. Economic policies have to be reviewed and changed to pro people if dreams of the martyrs have to be fulfilled.
As regards situation in Punjab the Akali –BJP combine and Congress are looting the state in turn. The state is in as serious debt crisis. This has to be stopped. Sanjha Morcha is a new light and we appeal to the people to elect the candidates of the morcha.
Those who addressed the rally include Com Kartar singh Bowani-Secretary CPI district Ludhiana, Dr Arun Mitra-Assistant Secretary CPI Ludhiana, Com Ramadhar Singh, Com Anod Kumar, Com Ramchand, Com Kameshwar, Com Buta Singh.
Posted by Rector Kathuria at 17:45 No comments: Links to this post