Top official warned of a disruption in war funding 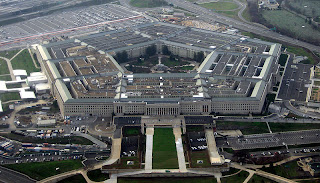 WASHINGTON, Feb. 16, 2011 - While acknowledging a tougher financial reality, the Defense Department's top financial official yesterday warned of a disruption in war funding and other likely effects if Congress continues to force the military to operate on continuing resolutions instead of fully funded budgets for fiscal 2011 and 2012.
In a "DOD Live" bloggers roundtable yesterday, Pentagon Comptroller Robert F. Hale explained President Barack Obama's $671 billion fiscal 2012 budget request for the Defense Department and detailed potential effects if the military must continue operating without a fully funded fiscal 2011 budget.
Although DOD officials continue to look aggressively for opportunities to cut and save, Hale said, Congress must give the department sufficient funding. Budgetary delays with continuing resolutions, he added, would pose a national security problem.
"We face a significant problem in the current fiscal year," he said. "We are on a continuing resolution, ... and a year-long continuing resolution would pose serious problems for us. It wouldn't provide enough resources to properly meet our national security requirements [and] would feature a $23 billion cut compared to our proposal."
Hale said funding via continuing resolution would limit the military's discretionary spending power, reducing managerial flexibility and the procurement of assets. Some 50 "shovel-ready" military construction projects continue to be delayed by continuing resolution funding, he noted, and the Army recently froze hiring of civilian personnel, leaving positions vacant for tank mechanics and the like.
Hale said the department requires "reasonable funding" to avert a fiscal crisis.
The fiscal 2012 budget request includes $533 billion in discretionary spending authority, with another $118 billion to support operations in Afghanistan and Iraq, compared with an authorization this year of $725 billion that included an additional $41 billion for the war effort.
Total defense spending would decline by $15 billion to $35 billion, depending on whether Congress funds war spending — beyond the normal budget — with a continuing resolution.
At the very least, the Pentagon requires $540 billion in fiscal 2012, Hale said, noting that the "reform agenda" of the new Congress has proposed funding of about $532 billion.
"While we're accomplishing our national security goals," he said, "we recognize the country has got serious economic problems, and we are working to tighten our belt."
Toward that end, Hale said, Pentagon officials continue to reform the budget and acquisitions process. Aside from a 10 percent cut in contracting services that would save $20 billion or so per year, he said, the military proposes cuts to ground forces to save another $6 billion over a five-year period. In a multi-year plan, Hale added, the military wishes to cut Army end strength by 27,000 while shedding 15,000 to 20,000 positions in the Marine Corps.
In addition, he said, the department intends to cut the Marine Corps' expeditionary fighting vehicle, but would maintain the service's amphibious capability with a cheaper vehicle and upgrades to the existing fleet.
Hale also said the military would continue to modernize equipment as planners continue to focus on current wars, ensuring proper resources for intelligence, surveillance, reconnaissance, rotary-wing aircraft and whatever it takes to build "partnership capacity" in the war zones of Afghanistan and Iraq.
"We're modernizing broadly for future conflicts, [with] aggressive modernization of our tactical air fleet, our ships, a new bomber program, a ground vehicle program and, finally, supporting our deployed troops — especially those in war zones — with all the resources they need, including financial resources," he said.
In fact, he noted, the imperative to "support the troops" represents the most dramatic change to the defense budget from this year to the next. The Pentagon proposed spending $8.8 billion next year for family support programs, with about $500 million in funding shifted from existing wartime funds.
"As we invest these dollars to meet our national security requirements, we follow several themes, [but] our most important goal is to take care of our people," Hale said. "We propose a pay raise of 1.6 percent, about $8.3 billion in family support spending, and substantial funding for our military health care."
Still, Hale added, Pentagon officials would be looking for cost savings within the Military Health System budget, noting officials likely would increase TRICARE Prime health plan enrollment fees for working-age military retirees modestly -- by about $5 per month for families and $2.50 per month for single beneficiaries. The fees, which haven't changed in 15 years, would then be tied to a health care index for future inflationary increases, Hale said.
Also, he said, the military gradually would eliminate subsidies for civilian hospitals providing military health care, creating a single tier of payment for hospitals. Officials also would increase pharmacy users' co-payments while encouraging beneficiaries to fill their prescriptions by mail and to request generic drugs.
Biographies:
Robert F. Hale
Related Sites:
"DOD Live" Bloggers Roundtable
Posted by Rector Kathuria at 21:32 No comments:

Posted by Rector Kathuria at 18:23 No comments: 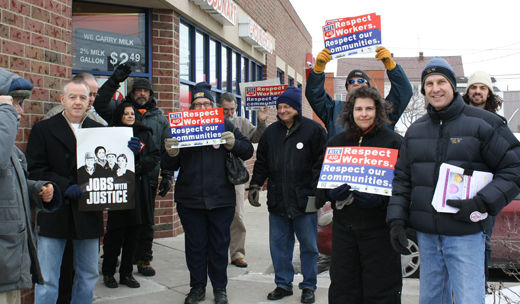 The weather was freezing but spirits were high as several dozen labor and community activists picketed Rite Aid at W. 117th St. and Lorain Ave. in Cleveland to protest the giant pharmacy's attempt to take away fully paid union health insurance.
While passing motorists honked in support, Councilwoman Dona Brady took a delegation inside and presented Store Manager Stacey Braddock with a letter backing efforts of United Food and Commercial Workers Local 880 to resolve the issue and sign a new contract.
"You're not being fair to your employees," she said. "Health care costs are skyrocketing. We want you to provide full coverage. Health care is not a privilege. It's a right."
Braddock would only say she would forward the letter. State Representative Nikki Antonio got the same response when she came later and confronted pharmacy district manager Tom Freda, who had been summoned to the scene.
The action Feb. 11 was part of a "National Valentine's Day of Action" and kicked off a week of protests against the company's anti-labor policies by a coalition including the UFCW, the International Longshore and Warehouse union, Jobs with Justice and United Students Against Sweatshops.
"Rite Aid Don't Break Our Hearts," read a flyer. "Show your love for workers' rights."
Mike Martino, an organizer with the UFCW, said the company was seeking to decertify the union in New Jersey and refusing to settle a contract dispute with 500 warehouse workers at Rite Aid's distribution center in Lancaster, California.
In northeastern Ohio, the UFCW represents 275 workers at 25 stores who have been working without a contract since the old agreement expired last April. Negotiations have been fruitless, Martino said, as the company has refused to back off its demand to end the union health plan and make workers pay for premiums.
"These are workers who have given up pay increases for health coverage," he said. The store clerks, who only make eight to nine dollars an hour, have twice voted overwhelmingly to authorize a strike, he added.
"A strike is imminent unless the company relents."
Other employers are watching the situation closely, said Laura Grissinger, a union steward at Giant Eagle.
"Our contract expires in September. We pay no premium now but Giant Eagle has said it wants us to make co-pays. We are all in this together."
The union has called on supporters to make their views known to Rite Aid store managers and transfer prescriptions to other union pharmacies until the dispute is settled. (Courtesy:Peoples World)
Posted by Rector Kathuria at 00:03 No comments: