ALRC on the Violation of Human Rights in Thailand

08/14/2013 12:14 PM CDT        Wed, Aug 14, 2013 at 9:52 PM
DOD news release issued today
American Forces Press Service
WASHINGTON, Aug. 14, 2013 - Today, the Department of Defense announced its plan to extend benefits to same-sex spouses of uniformed service members and Department of Defense civilian employees, according to a DOD news release issued today.
After a review of the department's benefit policies following the Supreme Court's ruling that Section Three of the Defense of Marriage Act is unconstitutional, and in consultation with the Department of Justice and other executive branch agencies, the Defense Department will make spousal and family benefits available no later than Sept. 3, 2013, regardless of sexual orientation, as long as service member-sponsors provide a valid marriage certificate.
The DOD remains committed to ensuring that all men and women who serve in the U.S. military, and their families, are treated fairly and equally as the law directs.
Entitlements such as TRICARE enrollment, basic allowance for housing and family separation allowance are retroactive to the date of the Supreme Court's decision. Any claims to entitlements before that date will not be granted. For those members married after June 26, 2013, entitlements begin at the date of marriage.
The DOD recognizes that same-sex military couples who are not stationed in a jurisdiction that permits same-sex marriage would have to travel to another jurisdiction to marry. That is why the department will implement policies to allow military personnel in such a relationship non-chargeable leave for the purpose of travelling to a jurisdiction where such a marriage may occur. This will provide accelerated access to the full range of benefits offered to married military couples throughout the department, and help level the playing field between opposite-sex and same-sex couples seeking to be married.
For civilian benefits administered government-wide to federal employees, the DOD will follow the Office of Personnel Management and the Department of Labor's guidance to ensure that the same benefits currently available to heterosexual spouses are also available to legally married same-sex spouses. 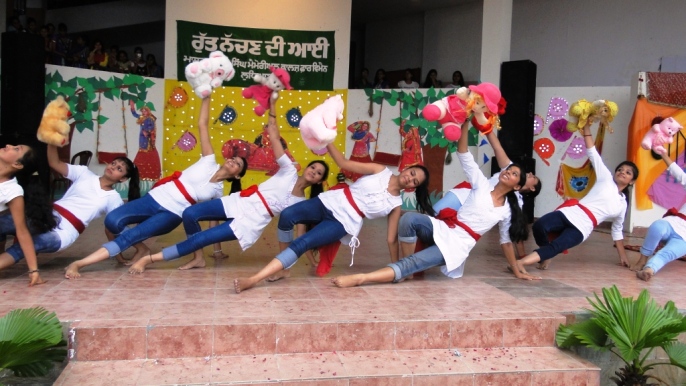 Ludhiana: 8 August 2013: (Rector kathuria): Teej Festival cum Fresher’s Party was celebrated at Master Tara Singh Memorial College for Women, Ludhiana to present an authentic Punjabi Culture with the blends of modern hues. The whole atmosphere was filled with gaiety when college girls dressed in elegant traditional as well as western attires staged their dance performances, skit, folk songs and modeling.
College Principal, Dr. (Mrs.) Parveen Kaur Chawla gave a hale and hearty welcome to the new entrants and also focused on the significance of Teej Festival in Modern Era.
Arshdeep Kaur was crowned ‘Teeyan di Rani’, Harmandeep Kaur and Navdeep Kaur were titled Miss Punjaban and Miss Majajjan respectively.  Ashwarya was crowned as Miss Fresher Shifali & Harpreet Kaur as first & second runners up respectively. Sukhpreet Kaur got the title of Miss Diva whereas Garima was declared Miss Crowning Glory. The tag of Miss Beautiful smile went to Gurleen Kaur.Various competitions like traditional style of pleating hair, Beautiful Pranda, Ethnic jewelry, Mehndi Application, Beautiful Bangles and were held and the winners were given prizes. S. Swarn Singh Ji (President, College Managing Committee) and S. Kawalinder Singh Ji (Secratery, College Managing Committee) graced the occasion and stressed on the need for maintaining our rich Heritage and culture in the Modern times.
College Principal, Dr. (Mrs.) Parveen Kaur Chawla stressed on the need of being aware of our elementary traditions and values. The celebration was culminated by adding another leaf in the book of unforgettable memories of the college.

Save Punjabi as Subject of Study in the Colleges of Delhi

No to insecure and hostile work environment

Enjoy the freedom but

Posted by Rector Kathuria at 00:45 No comments: Links to this post