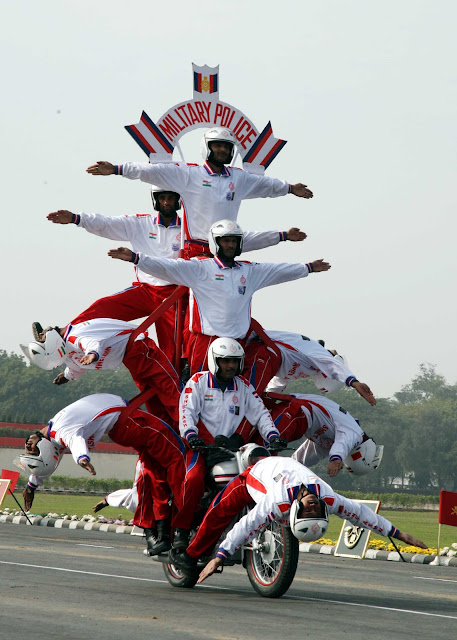 Military Police corps performing on Motorbike, at the Army Day parade, in New Delhi on January 15, 2012.  (Photo and detail by PIB)
Posted by Rector Kathuria at 19:45 No comments:

Posted by Rector Kathuria at 19:15 No comments: 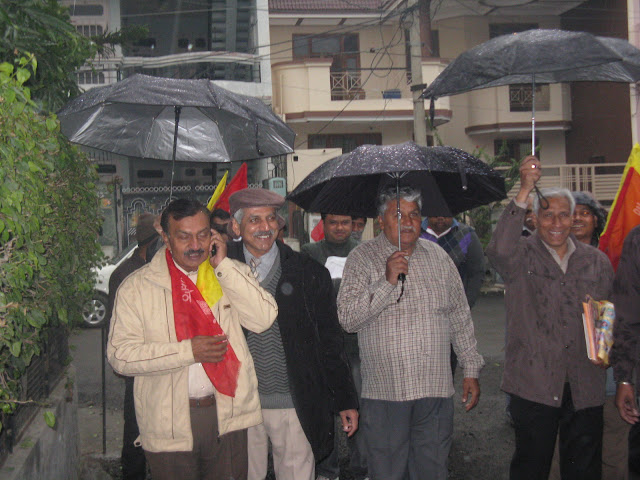 Undeterred by the rain, the CPI candidate of the SANJHA MORCHA of PPP,CPI, CPI(M) and Akali Dal (Longowal) from Ludhiana West constituency Dharam Pal Maur, continued his door to door campaign and public meetings today in the Rishi Nagar, Chand Colony, Sukhmani Enclave, Shant Park, Rajguru nagar. Adressing a public rally in his support at Chand Colony Mrs Amarjeet Kaur National Secretasry CPI said that the agenda in this election to defeat Congress and to oust the present ruling Akali-BJP alliance who have successively ruined the state and lowered its position in the country. said that the agenda of the Sanjha Morcha is to establish rule of law and to take Punjab out of the serious debt of Rs. 138000 crore as a result of wrong policies of the alternate Congress and Akali-BJP governments. The people this time have a choice in the form of Sanjha Morcha. There is no rule of law. The alliance partners have gained control of the economy of the state for their benefit. Police is at the service of few VIPs. Corruption is rampant. We have witnessed the infamous City Centre scam in our city itself under the former Congress govt. 2G scam, Common Wealth games scam and Adarsh society scam have fully exposed the hollowness of the congress.  It is time that the people vote for the SANJHA MORCHA of PPP, CPI, CPI(M). Akali Dal Longowal to establish a corruption free government and for economic development of the start. That is why she appealed to the people to vote for Dhram Pal Maur and press the button of Sickle and Ears of Corn on the 30th January. .
On this occasion Mr. Maur while addressing the voters at different places Mr. Maur stated that he will meet the aspirations of the people as he has done as the president of the PAU employees Union for 12 years. As per the  Manifesto,  the Morcha promises to fill all the vacant posts in government / semi government departments on regular basis and not on contract basis. Unemployment allowance of Rs. 2000/- per month will be paid to the unemployed. More and more government schools and colleges would be opened to provide education as per the times so that common people can get quality education. Health care would be made affordable by upgrading the government hospitals and also providing due facilities to the private health providers in the small scale sector. Small scale industry will be given preferential treatment for its development. Special attention through budgetary will be given for development of Punjab Agricultural University (PAU) and Guru Angad Dev Veterinary Sciences University (GADVASU) for solving their financial crunch. In addition pension benefits will be ensured to the non-government college teachers. Undeterred by rain, D P Maur on election spree
Posted by Rector Kathuria at 17:15 No comments:

By Elaine SanchezAmerican Forces Press Service                  -SAN ANTONIO, Jan. 12, 2012 -
Douglas B. Cooper, a clinical neuropsychologist for the San Antonio Military Medical Center's Traumatic Brain Injury Service, explains how different areas of the brain are affected by brain injuries during an interview at the center in San Antonio. Cooper is the team lead on the Study of Cognitive Rehabilitation Effectiveness, dubbed the SCORE trial, which is examining cognitive rehabilitation therapy's value as a treatment for service members with mild TBI. DOD photo by Linda Hosek

Posted by Rector Kathuria at 00:45 No comments: