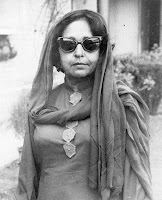 Malika Pukhraj (b1912 – 4Feb 2004) was a highly popular singer of Pakistan. She was generally called as "Malika" meaning "The Queen." She is extremely popular for her rendition of Hafeez Jalandhri's song, Abhi to main jawan hoon ("I am still youthful"), which is enjoyed by millions not only in Pakistan, but also in India. Her popular numbers were,Lo phir basant aaya and Quli Qutub's Piya baaj piyale piya jaye na and Faiz Ahmed Faiz's Mere qatil mere dildar mere paas raho. Malika Pukhraj, was born in village Mirpur, on the banks of the River Akhnoor, 16 miles from Jammu, and as she grew up her mother moved to Kanak Mandi area of Jammu, in present Jammu and Kashmir, where she spent early years of her life, she was given the name "Malika" at birth, by 'Majzoob', 'Baba Roti Ram, a spiritualist, in Akhnoor area, and named Pukhraj by her Aunt Malika Pukhraj who was coached by Ustad [Ali Baksh Kasuri-father of Bade Ghulam Ali Khan]. At age nine, At nine she visited Jammu and performed at coronation ceremony of Maharaja Hari Singh, who got so impressed by her voice that she appointed a court singer in his Durbar, and stayed there for another nine years .
Over the next 8 decades she captivated her audience with her command over the singing genres of Thumri, Ghazal, Bhajan and folk Pahari Geet, including Dogri folk songs . She was among the greatest singers of British India in the 1940s, and after Partition of India in 1947, she migrated to Lahore, Pakistan, where she received further fame, through her radio performances with composer, Kale Khan.
In 1980, she received the Presidential Pride of Performance Award, Pakistan. In 1977, when All India Radio, for which she sang until Partition, was celebrating its Golden Jubilee, she was invited to India, and awarded with the 'legend of Voice' award. Malika Pukhraj also recorded her memoirs in the novel Song Sung True.
Malika Pukhraj, died in Lahore on February 4, 2004. Her funeral procession started from her residence West Canal bank, and she laid to rest at her ancestral 'Shah Jamal' graveyard in Lahore.
Malika Pukhraj was married to Syed Shabbir Hussain Shah, a Government Officer and had 6 children, including Safiea, her eldest daughter; Tahira Syed, one of Malika Pukhraj’s two daughters, emerged as a well-known singer in her own right. Her other daughter, Tasneem, is married to famous lawyer and senator S.M. Zafar. Her eldest son Tauqeer lives in Model Town, Lahore, and his wife Shahnaaz, her other son is, Maj. (R) Syed Tanveer Hussain. 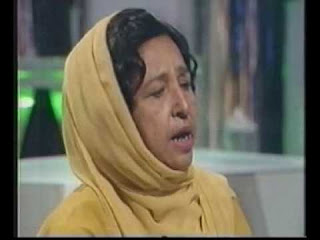 Gifted with a melodious voice that cascaded like a mountain, she sang both Hindustani and Dogri songs, interspersed with ghazals. This songstress of the hills was like a belle who unburdened her heart with natural ease and grace that never gave the impression that her music was being forced on the listener. It had the smoothness of a silken texture from which all crudeness had been eliminated so that the senses were not jolted but lulled into the realm of a dreamland, where soft rhythms merged with the morning breeze Naseem that seemed to waft through the assembly before which she performed. Mallika used to wear dark glasses all the time as though to escape the harsh realities of life, but still her vision was not blinkered. Her youthful daughter Tahira was there to remind one of Mallika's pristine beauty. 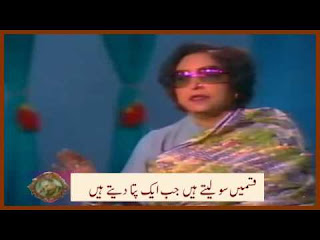 This scribe tried to interview Mallika Pukhraj after the show but she held up her still dainty hand with the exclamation that the performance had tired her and she would expect people to judge her on the basis of hunar-e-mosiqui (talent of musical diction) to convey all that she had to say and stood for. Tahira was more forthcoming, her pretty face making her views and feelings more expressive as she spoke about her mother's love for India and the Dogri culture which she missed very much in Pakistan. After that brief meeting with Mallika Pukhraj one couldn't help drawing comparison with Begum Akhtar. To Jigar Moradabadi and Josh Malihabadi she was bulbul-ki-awaz, the sweet voice of the bulbul. Both were among the Begum's intimate friends who knew her even before the days when Munna Khan played the tabla at the Chowk in Lucknow, where she and her mother shared a kotha during the early years of World War II. Jigar's ustad, Asghar Gondawi was, according to some, her first husband.
One never thought of Begum Akhtar as the courtesan of Faizabad because that part of her life was over by the time one got to know her. The days in Rampur with the nawab and the jewel scandal, the rivalry with Siddeshwari Devi and Rasoolan Bai and even Mallika Pukhraj of "Abhi to main jawan hoon" fame had also become part of drawing room whispers by then.
Tahira now thinks of Begum Akhtar as an aunt whose voice she heard distinctly even in the far-away Lahore while Mallika herself had only fond memories of her, with hardly a trace of envy. Yet some of those who saw the Begum would wish that she had the face and figure of Tahira, for that is the sort of beauty people who never met her link with that throbbing voice. But to come back to Mallika Pukhraj, one is sad that she is no more and sadder still to know that Tahira and her lawyer husband have separated after an acrimonious divorce.
Her voice is reminiscent of her mother's with the sort of pathos one associates with the grieving heart of the beloved stranded in the wilderness. Every so often it pierces the heart and one sees in the mind's eye a nose-ring flashing through a half-open curtain, lightly painted cheeks and lips from which emanated that song of eternal love blending with the irony of an aging singer. To sustain such pathos long after being part of the big glamour show was Mallika Pukhraj's speciality.
Posted by Rector Kathuria at 13:49