CONTINGENCY OPERATING BASE ADDER, Iraq :  Any parent whose child follows him into his profession will feel pride. 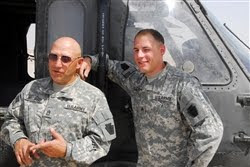 A Pennsylvania National Guard soldier here can be doubly proud, then, as one son has followed in his military footsteps while another is pursuing his civilian career.
Army Sgt. 1st Class Gary Williard of Company D, Task Force Diablo, is a retired police officer and an Army National Guard aircraft maintenance platoon sergeant.
His older son, Gary Jr., joined the Tower City Police Force in Pennsylvania, where his father retired in 2006 as chief of police. Williard's younger son, Army Sgt. Joshua Williard of 628th Aviation Support Battalion's Company B, worked in the next hangar over from his dad during much of their recent deployment here and is now completing his deployment with final processing in the United States.
"I pinned on Joshua's sergeant stripes when he got promoted here on Aug. 27," Williad said. "That was quite a moment for me."
Williard began his military career in 1976 as a propeller and rotor mechanic for the Pennsylvania Army National Guard. After a break in service from 1982 to 1990, he returned to the Guard and has worked in maintenance on many aircraft. His younger son said he plans on a career in aviation maintenance with the Army National Guard.
Gary Jr. worked for his father for five years in the Tower City Police Department before moving to the Pennsylvania State Police, where he has worked for seven years.
Williard and his wife, Dina, ran an automotive repair business together. Now they own rental apartments.

"Dina runs the apartments while I am away," Williard said. "With Joshua and I deployed and Gary Jr. busy with work, she'll be very happy for us to come home."
Williard deployed from 2003 to 2004 to Kuwait in both aviation maintenance and security roles.

"Even on deployment, I was still a cop," he said.