Naxal menace will be fought
with a people centric approach, says Jairam
Naxal menace will be fought with a people centric approach, says Jairam
Union Minister for Rural Development Shri Jairam Ramesh has said that the government is working on a multi pronged people centric strategy to deal with Maoist violence in the country. Inaugurating the All India Editors' conference on Social Sector issues here this evening, he said, only police centric response to deal with the biggest internal security challenge is not going to succeed. He said, the Maoist menace can be taken head on by addressing the developmental concerns of the tribals, besides increasing the intensity of political activity. Giving the example of Junglemahal area in West Bengal, where intense political activity has forced the Maoists to take a back seat, the Minister said, people-centric welfare measures and better and sensitive administrative mechanisms are other necessary ways to deal with the naxal challenge, besides resorting to security measures through police and para-military forces. Dwelling in detail on the problems in dealing with Naxal violence, which has taken deep roots in 78 districts of the country, Shri Ramesh said, failure of politics and development were the reasons for the upsurge in violence. He said the centre will be redesigning and restructuring the rural development programmes and will make them more sensitive to the needs of the common man and particularly the tribal community. The Minister said, he is working on the institutionalization of the Concurrent Evaluation Network through the NGOs and research institutes at the Central and State level to get the regular feedback about the implementation of rural development schemes on the ground level. He said, the Ministry has already decided to open all rural schemes to CAG audit to bring about greater accountability and transparency. The Minister said, he is also planning to give more flexibility to the state governments and his target is that by 2017, the states will prioritize about 50 percent of all the rural schemes spending, besides enhancing the importance of neglected sectors like drinking water supply and sanitation.

Speaking on the occasion, the Union Minister of State in the Prime Minister's office, Shri V.Narayansamy said, a foolproof mechanism must be evolved to check the leakages in the implementation of the central schemes by the State governments. Asking the media to provide valuable suggestions in this regard, he said, the role of the fourth state should not only be confined to criticizing the government, but they should also highlight the positive achievements. Lamenting over the siphoning of funds meant for schemes like health, education and sanitation by the vested interests, the Minister urged the regional media to play a pro-active role in exposing the corrupt.

In his address, the Lt Governor of Puducherry Dr Iqbal Singh said, media makes democracy to function in its true spirit by informing the citizens about the developments in society. He said, editorial independence to pursue public interests is an essential facet for the press to lend credible voice for creating informed citizens.

The Chief Minister of Puducherry Shri N.Rangaswamy highlighted the various developmental measures initiated in the state for the welfare of the people. He expressed hope that the two-day deliberations will focus upon constructive schemes and decisions on social infrastructure facilities in a full-fledged manner.

In her address, the Principal D.G of Press Information Bureau, Ms Neelam Kapur said, the conference on Social Sector issues will provide an important opportunity to the representatives of the small and medium newspapers to interact with the policy makers. She said, the UPA government is implementing a large number of social sector programmes spanning various Ministries, which should be highlighted by the media so that the common man can reap their benefits.{PIB} 10-February-2012 20:09 IST
<><><>
Posted by Rector Kathuria at 21:30 No comments: Links to this post

All India Editors Conference at Puducherry 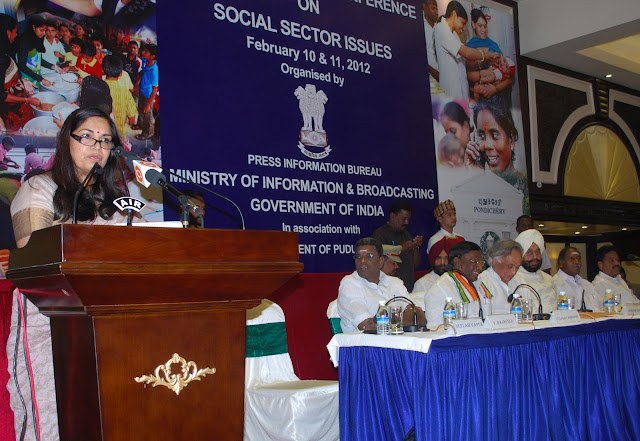 Govt.order bound to have nationwide implications

The  Central  Government on 09.02.2012 has filed its Order dated 02.02.2012 in  the Hon’ble Delhi High Court informing the Hon’ble Court that after the Hon’ble Supreme Court has affirmed on 01.09.2011 the directions passed by the Hon’ble Delhi High Court on 22.03.2007 in Social Jurist vs GNCT of Delhi, the Government of India has taken a policy decision on the basis of judgment passed by the Hon’ble Supreme Court that all the six hospitals which have been provided land by Land & Development Officer must strictly follow the policy of providing treatment free of cost to 25% OPD and 10% IPD patients. It has also informed that the Government of India has further incorporated the aforesaid conditions mentioned in the Para 3(i) to (xviii) above as a part of the terms and conditions of lease/allotment.

“Though the Govt Order relates to six hospitals of Delhi, namely, (1) Sir Ganga Ram Hospital, (2) Mool Chand Khairati Hospital, (3) St. Stephen’s Hospital, (4) Veeranwali International Hospital/ PRIMUS ORTHO, (5) R.B.Seth Jassa Ram Hospital and (6) Vimhans, but it will certainly have nationwide implications as the same lays down a national policy in principle for all private hospitals all over the country to whom public lands have been allotted on concessional rates,” says Lawyer and Social Activist Ashok Agarwal who has been fighting for the rights of the poor for the last more than 4 decades.